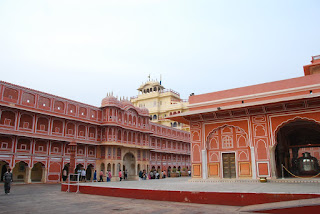 It was 9th of December’09, most people all over India, in fact all over the world would have been planning for their holidays during Christmas/New Year. Unlike the majority, I was all set to leave Mumbai in evening for my mission of touring Rajasthan. Looking at my turnout of T-shirt+ track pant, along with two bags i.e. a backpack and a duffle bag, instinctive comments came from my roommate Arun.v.m - “Man … you are looking like Kasab! ”. Well, his remark turned out to be true to some extent. When I was travelling by slow-local train from Andheri to Mumbai Central, as soon as I kept both my bags on the luggage carrier, people around me started giving me a very weird look. But seeing my behaviour for a minute or two all of them relaxed and carried on with their day to day worries.

Flashback
In the half-an-hour ride to Mumbai central I recalled all past events which lead to materialization of the trip. The very first thoughts of going for a mega-trip started when I had a casual discussion with my classmate Jagadeeshan for an excursion right after placement season i.e. before the end of the PGPM program. The obvious candidate was Rajasthan since both of us never been there and the place is relatively near to Mumbai than our hometown Bangalore and Salem. The thoughts remained in the background for long time as were busy with the rigorous course.

Himanshu's Plan
When myself and Jagdeeshan got job offers and were out of the placement process, the thoughts of going to the trip came to the foreground, but this time Jags did not show much enthusiasm as he was looking forward for a visit to his home. Then, I looked for other potential candidates for the trip. First I had a brief discussion with Himanshu, he with his experience of travelling in Railways came up with a basic draft plan of covering major places of Rajasthan in just 3 days, and immediately shot a mail to people who might be interested. I did not really dig deep into the logicalness of the plan and as usual I immediately said yes. Sivaram, Sorabh and Jag requested for a week’s time to decide. In between Himanshu made two trips Delhi to have rendezvous with his prospective life partners. Finally 12 days before the last day of the program, Sivaram and Sorabh said no to the trip, Jag as usual was in a dilemma didn’t say either yes or no. Himanshu looked very optimistic and asked me if anyone of my Bangalore friends can join. But somehow his words didn’t look very convincing, it was understandable as he had other priorities in his life.

Self Planning
The unfortunate series of events injected enthusiasm in me to plan the trip on my own. First I opened the tourist map of Rajasthan and looked at the places of interests in it. Jaipur is in North East and Jaisalmer is in extreme west, Jodhpur is in center and Udaipur is down south. Travelling from one end of state to the other will atleast take 12 hours! With this I realized that the plan chalked out by Himanshu was sufficient to see only railway stations of tourist locations. After reading several travelogues and wikis, I felt it’s better to cover less places and spend more time at a particular place. With sufficient research the plan boiled down to covering three major destinations Jaipur, Jaisalmer and Jodhpur. For planning I had put down all information about places to see, hotels, phone numbers etc in a single sheet using freemind software. The hard copy of the same sheet turned out to be ready reference for the entire trip.

Raju and ITB
The major confidence boosters were the posts of Arun’s India-travel-blog. The post on Raju – the man with a tourist auto increased the confidence many fold. Usually in India, the major headache while travelling is either getting accommodation or intra-city travel. In these areas majority of tourists get ripped off. So, after getting Raju’s number from Arun’s blog, I immediately called him up and enquired whether he will be available on the days I was planning to be in Jaipur. His “yes” was the major major booster for further proceedings of the trip. After getting convincing response from Raju, I immediately made an attempt to book train tickets to Jaipur. Of all the options Jaipur-Mumbai superfast had a decent schedule i.e. departure at 1850 and arrival at 1250 next day. But as usual getting tickets in General quota 3-4 days before the trip was pretty difficult. Then after all circus I managed to get tatkal tickets at premium rates. For me there were some thoughts to kick off the trip from Udaipur since it’s closer to Mumbai than other locations. But the physic comfort of having a person like Raju in Jaipur was sufficient enough to kick start the trip from the capital of the state.

From my Bangalore friends only person to show interest was Naveen aka Ande. As his work hours were flexible, he was able squeeze a week’s break in his hectic work schedule. I asked him to come directly to Jaipur by flight as the secondary option Bangalore-Mumbai flight + Mumbai-Jaipur by train will be too tiring for him. My other concern was intra-Rajasthan travel, as it would be very difficult to get confirmed tickets and we may be forced to travel in rickety buses. But Ande’s assurance that he would be ready to travel in a bullock cart too was a major relief for me.

Journey and Co-passengers
The flashback finished in time before the arrival Mumbai central station. After getting down I moved from local-train platform to inter-city train platforms and waited for my train to arrive at platform for boarding. The train arrived on time and departed on time. Traveling alone for long distance was boring as usual. Before going to sleep overnight, I kept myself engrossed in the magazines and books which I was carrying and didn’t made any efforts to build rapport with co-passengers. Gradually by next morning, I started talking to people in my compartment. First with two uncles who were going to Jaipur to attend a marriage. When they came to know that I was going to Jaipur for traveling and would be heading to Jaisalmer and so on, both of them started canvassing for their hometown as a tourist destination.

Another co-passenger was businessman doing dandha related to railway wagon. He was wearing very formal chamak-chamak dress. He had good friendship with many pantry staff and by the looks of things I guess he had a overnight booze session with the staff. In fact he was carrying a bag full of booze which one of pantry staff took from our compartment.

Also, there was one Electronics Engineering student from Pune who was going to Jaipur for one month vacation. When I asked about places to see in Jaipur the first five places he mentioned were either a mall or a night club. The only interesting place he mentioned was some fort in outskirts of the city where the famous bollywood movie Rang De Bansanti was shot. With all chit-chats the time passed by and the train reached Jaipur station on time at 1250 pm. Raju was already waiting for me outside the entrance, as I had already intimated about my arrival from previous station itself.