After having an overnight journey from Mumbai,  I was at Aurangabad’s Manmandir bus stand, India’s largest private bus terminus ( wow !).. later I checked-in at dormitory in the same complex and finished my morning ablutions to be ready in time for the ITDC Ajanta trip as the pick-up time for it was at 8.40 am. In order to be risk-averse,  I had decided to explore Ajanta on day-one itself as it’s 100+ km from Aurangabad. The booking for the conducted trip at travel office at Manmandir complex itself.

The ITDC mini-bus arrived on time. Looks-wise from outside the bus was not a flashy bus but the interiors were pretty normal with push back seats. When I boarded the bus it was half filled and later was filled up after 2-3 subsequent stops. Most notable co-passengers were a couple comprising an Indian guy and a firang babe. Rest of people in the bus were giving them continuous weird,curious glances. Can’t blame anyone as such kind of reactions are embedded into our sub conscious mind.

As the bus moved out of city limits, I got into a brief review-mode and really could not believe for a moment I was really heading towards Ajanta ! Thanks to one-stop feature of Manmandir-complex, things happened at a pretty fast pace and also being alone one can make decisions in a lightning fast manner. From the brief review-mode, I immediately switched to napping mode by making full use of little bit luxury which was available and of course to flush-off the hangover accumulated due to overnight journey. By the time I woke up, our guide for the trip was about to start with the introduction and later he briefed us about the day’s itinerary. For convenience sake, he collected entry fee from us beforehand in order to avoid queuing delays at the site. While collecting money he randomly asked some passengers about their where-from details. Later on, I reciprocated by having a brief chat with him and discussed about the place, the best time to visit and also about his profession. Getting to know my background, he introduced me to another co-passenger who was travelling alone. His name was Naveen, incidentally he was a Kannadiga and from Bangalore. Naveen was there in Aurangabad for some business purpose and was visiting Ajanta for utilizing the holiday on account of Good Friday. And not to mention, he turned out be my companion for the whole trip.

The ITDC bus took us till the T-junction which is 5 km from the caves, from there we had to take a dedicated MTDC bus to reach foot of the caves. The entry into the premises were smooth as our guide took the tickets for the whole group at one shot. One of the surprising while entering the site was there was no fee for still-camera, strike contrast to my last major trip to Rajasthan where I had to pay camera-fee even for small and not-so-significant monuments. After passing entry gate and typical ASI garden landscape we ascended by taking a curved, uphill path to reach starting point of the caves.

At first sight, the caves in sequence developed adjacent to a river by name Waghora appeared stretching many kms. The semi-circular sequence of caves was created from the efforts of Buddhist priests and followers spanning across centuries. The very first cave was carved as early as 2nd century BC. The group of caves amidst dense sahayadri forests were a well kept secret and hence were devoid of any destruction from Islamic rulers who had invaded/ruled our country over 1000 years. Later in early 20th century, the caves were discovered by British officer John Smith who accidentally landed into the place in search of tigers. He along with Nizams of Hyderabad took initiatives for proper maintenance of the caves.

Due to time at disposal our visit was limited to Caves 1,2, 9,10,16,17,19 and 26. The caves are of two types caves one is chaitya-grihas(sanctuary) and other is viharas(monastery). Some caves are famous for their paintings depicting life of Buddha and some are famous for their unique structure indicating transition in mode of worship in Buddhism. A few highlights of the exploration are illustrated in the photos below. Cave-1: Bodhisatta Padmapani, flagship painting of Ajanta Caves.
[ The Bodhisattva, or potential Buddha, is as an elegant prince. He wears a high crown with precious stones in it. On his neck is a pearl necklace, with a central big blue stone. In his right hand, he holds an open lotus, suggesting awakening, with his gracious bent head and his golden body, the almond eyes and the delicate eyebrows, the figure is almost feminine. (Source: ajantacaves.com) ] 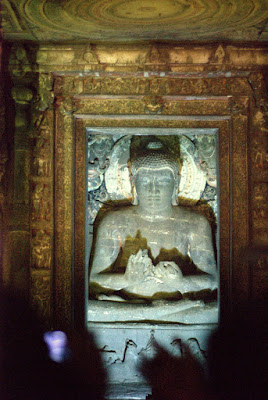 Cave-1: Buddha seated in the "Vajra Paryankasana" posture:
The posture is with raised right hand in abhaya mudra (hand pose which grants fearlessness) 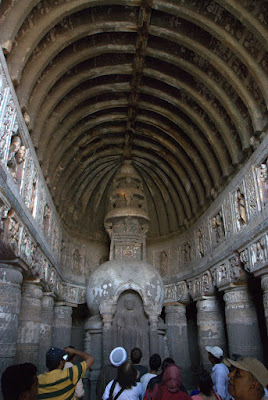 Cave-19: One of the Chaitya grihas.
[ Chaitya grihas are divided by colanades into a central nave, an apse and side aisles, the later continuing behind the apse and thus providing circumambulation. At the centre of the apse stands the object of worship in the form of a chaitya or stupa (Source: ASI Guide). ]

I had a few blips while doing exploration. Firstly, I had set the exposure compensation of my camera to minus-five unknowingly. I wasted half of the time trying to figure why the hell the snaps are coming out pathetic in manual mode :). Secondly, since I was wearing shoes, the process of removing and wearing shoes before and after every cave visit turned out to be very tedious. Last but on the least due to soaring summer heat, we were down to minimum energy levels by the time we were seeing Cave 19 and 26 and were not in the right frame of mind to explore further on our own in the buffer time given by the guide. Anyways, looking forward to visit the place again sometime in Monsoon when the entire landscape will be lush green and the Waghora river adjacent to the caves will be in full flow.

After the completing the exploration we had lunch at lone MTDC restaurant next to the booking office. Due to space constrains we had share a big table with other tourists. One among them was a senior person from Mumbai who was travelling with his wife. By profession he was an aeronautical engineer at an Australian firm at Sydney and on account of his work he had seen several countries around the world. A very enthusiastic person and it was mesmerising to listen to his experiences. Also in the same table there were a young English couple who were on a two month long India tour. I was amazed to know that the English guy had actually resigned from his job to travel in India ! Then after finishing the lunch we started our journey back Aurangabad and were back in city by 5.30 pm concluding a memorable trip one of world heritage sites.