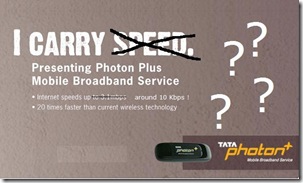 Last Friday, after coming back from work as part of usual routine I decided log onto Internet do some usual surfing and check personal mails. But I was totally blocked from doing so, as my Tata Photon plus was not getting connected at all. While connecting it was throwing some vague error “Error 678: remote computer is not responding”. I thought it was some temporary interruption and decided try it again after an hour. Unfortunately the problem persisted entire night and I had to pass the time with frustration by watching boring IPL matches.

Next day in morning when I called up the customer care, I got to know that my connection has been disconnected because of some silly credit limit issue. For that they had sent an ambiguous email only a day earlier without any warning.

The connection was re-activated only after payment of excess amount on my monthly bill  which was due on April 24th. I lost the interest for 14 days .. yes … banks nowadays pay interest on a daily basis !

This incidence was just an addition to the poor experience Tata Photon Plus which I am facing was last three months.

ps: This post has been written using an offline editor. Doing it online on a Tata photon connection would have ages :)