This is a trackback post on my experiences of a one-day trip to Heidelberg and Freiburg, when I was in Germany for Students’ Exchange program. The planning for the trip was very peculiar, calling it as a coincidence would be an understatement. It started from a series of orkut-scraps with my cousin Arun who had stayed previously in Germany. He suggested me to make a trip to Heidelberg, after getting to know that I was staying in Reutlingen.

Seeing Arun’s suggestions in my orkut scrapbook, Divija(my engineering college mate) who was staying in Heidelberg at that point of time got curious and scrapped me, asking about my whereabouts. And in following conversations he promised to be a host for my trip to Heidelberg.

Also, my ex-colleague Asha who had moved to Germany after her marriage, was inviting to her new home at Freiberg for a  long time. Since Divija was enthusiastic to do a long-fast drive in his BMW, I decided to club Freiberg visit with  Heidelberg excursion. The trip did not materialized immediately as I was either busy with university excursions, Five-S trips or some academic work. Then, the last Saturday of my stay in Germany I made myself free for the trip.

For the train journey to Heidelberg which I had do on my own, I bought a full day ‘Baden-Württemberg pass’ for 19 Euros in advance. I took early morning 7-am IRE from Reutlingen.  While waiting for changeover train at Stuttgart, I had breakfast at Yormas for 2 Euros ( Briezel + Milch Cafe). Around 10 am, I arrived at Heidelberg station and Divija came there within 5 minutes to pick me up in his car. 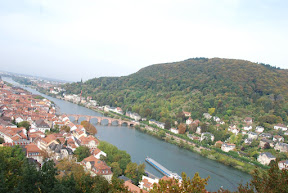 Our first destination was Heidelberg Castle. After parking the car at a dedicated place, we walked on a steep path to reach the castle.  First we had a beautiful view of Neckar river valley from Scheffel Terrace. From the viewpoint one can see all signatures places of the city Cathedral, Karl-Theodor-Brücke  and so on.

After witnessing the city views, we continued with our visit to the core area of the castle. First we had nice walk in shades in Gardens of the castle, the fallen dry autumn leaves added value to the experience. In the garden there’s one unique fountain with a statue in between. First we thought the statue is  of famous Greek philosopher Socrates and later we got to know it’s actually ‘Father Rhine’. Then we entered into the actual castle which is now converted into a museum. The entry ticket was 3 EUR per head and we also opted for a audio guide for 4 EUR. 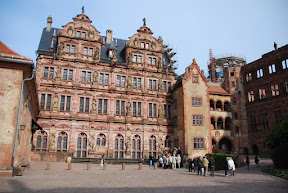 Some the key things in the museum were: 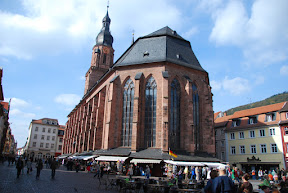 Then after completing the castle visit we had nice walk in the city thanks to calm-sunny weather. The day was 20th anniversary of German Unification Day, most of places including the Hauptstrasse[main street] were deserted. All shops were closed except some eat-outs. While walking randomly in the Münsterplatz area, we discussed about our amusing experience in Germany. Divija mentioned about his unique association with the city. His uncle has been staying in Heidelberg since 1970s, working as a professor of Sanskrit at Indology department in the university .. interesting ! Later we went to the bridge Karl-Theodor-Brücke, took some photos standing next famous Heidelberg Brass Monkey and walked upto the beginning of Philosophenweg. We had to cut short our random city walk due to time constraint and for lunch Divija took me to locally famous Raja Rani hotel, a Punjabi hotel where we had  Palak Paneer and Roti. Divija recommended me to have Mango Lassi, the offering of the hotel which by word-of-marketing had become a flagship item :) .. Mango Lassi in a punjabi hotel ?.. ironical !

After lunch we started our journey towards Freiburg,  cruised in Divija’s BMW at an average speed around 150 kmph and at max around 200 kmph ..quite impressive stats :). We had a brief coffee stopover break at a fuel station somewhere near Baden-Baden and experienced poor customer service at Burger King outlet. When we were standing in a queue, the person in-charge of the counter just walked away as her duty time was over without even intimating us. We had to explicitly ask the in-charge of adjacent counter whether the counter was closed or not. 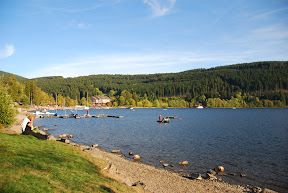 After the break we headed towards Lake Titisee, a fresh water lake in Black Forest area. The road to the place was bit challenging because of curves, but Divija with his Agumbe ghat experience handled everything with dexterity.  At the parking lot in Titisee we made a brief struggle to operate the ticket vending machine, seeing our struggle one person who was taking out his car handed over his used ticket and asked to re-use it. We spent some time sitting and walking besides the lake. Divija narrated about his last visit to the lake during winters, when the water was completely frozen and people were doing skiing, skating on it. Later we did dome window shopping at the stores next to the lake. Had thought of buying the famous cuckoo clock, but after seeing the price tag I gave up my plans.

Freiburg and Asha’s home
After seeing Titisee, as it was getting dark and we headed towards Asha’s home at Freiburg. A calm city and there were hardly any people walking on the road. She and her hubby Arun came downstairs to pick us up as we had difficulty in spotting her house. Then Asha served us nice Karnataka dinner Bisi-bele-bath and curd rice.  While having dinner we had a nice long chat with Arun .. chatted about his experiences in Europe for last 8 years. 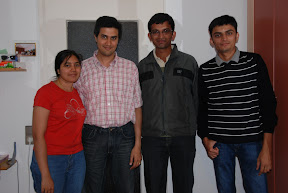 After saying Auf-wider-sehen do Asha and Arun, we started our return  journey. Since the last train from Heidelberg to Stuttgart was at 9 pm, I asked Divija to drop me till Karlsrühe as the trains to Stuttgart from there were till 11:10 pm .. In between, we stopped at WC which was right next to Autobahn and we got an F1 like experience by seeing the cars passing by. We reached Karlsruhe at 10.35 pm and I missed penultimate train just by five minutes. Then after saying good-bye to Divija and I boarded 11.10 pm train. Unfortunately the train left 15 minutes late and I missed the connecting train from Stuttgart to Reutligen. Then I had take a special train from Stuttgart and it was fully crowded with October fest drunkards. The train moved very slowly like typical Indian passenger train, stopping for 10-20 minutes at every station, more than an hour at Plochigen. The experience was very different from typical Deutsch-Bahn experience. All happened because of late departure of the train from Karlsrühe. Finally, I  was back in Reutlingen at 3.30 am finishing my maiden semi-solo trip in Germany :) Thanks to Divija for being a nice host and to my cousin Arun without his suggestion scrap in orkut this trip would not have materialzed.