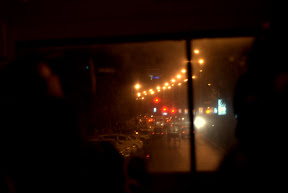 In the month of March when my Mother was in Mumbai for two weeks, I had a plan to show her a few signature places of South Mumbai. She was also very enthusiastic as some of the places were recently in news due to 26/11 attacks. Considering her endurance levels it was not a good idea to cover the places on foot and the alternative way of covering places in a rickety fiat taxis was not desirable.

Therefore, we opted for a conducted tour by MTDC Open-Deck-Bus Nilambari. The bus tour is scheduled twice in evenings, only on weekends. As suggested by the person at MTDC phone enquiry, we didn’t do any advance bookings, and got the tickets easily at the booking counter near Gateway-of-India just an hour before the start of first trip(at 7 pm).
The total duration of the trip was one hour guided by a lady narrating about the history and significance about the location which passes by.

The landmarks covered in the tour were (in chronological order):
Some key observations