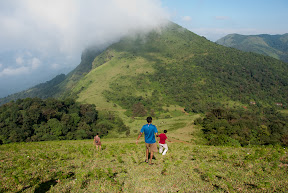 Sometime in the first week of Sep-2010, I got a mail from my blogging buddy Srinidhi Hande (popularly known in cyberspace as enidhi) that he would be in BLR on Oct 9-10th and was planning to avail an offer from Avis i.e. a self-driven Ford Endeavor at discounted rent. Next, we brainstormed for a place within 300 kms radius of Bangalore and ultimately decided on Coorg as our weekend destination. The major driving factor for the choice was that the rains would have receded and greenery would be at its peak under a blue sky with white patches of clouds ! In fact, the weather conditions turned exactly as per our expectations !


Places Covered: Dubbare, Chikkihole Dam, Nisarga Dhama, Golden Temple, Kakkabe, Cheluvara Falls, Talacauvery, Bhagamandala, Madkeri.
Mode of Transportation: Self driven Toyota Innova hired from Avis.
Route: Bangalore->Mysore->Kushalnagar(via Hunsur)->Kakkabe(via Napoklu)->Talacauvery->Madkeri->Mysore->Bangalore.
The six people on board for memorable trip were myself, Srinidhi, Seena, Ravi, Sandesh and Kishore. In the beginning there was a minor hiccup, the Ford Endeavour which Srinidhi had hired was not in proper condition and basic things such as indicators were not functioning. So, Srinidhi had got the vehicle replaced with an Innova at the time of delivery itself. After picking up all the people were off our destination via NICE Road. We had a brief stopover at CCD Maddur, the outlet which operates 24/7 and for obvious reasons has been a favourite hangout for people travelling between Bangalore-Mysore. 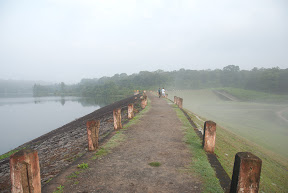 Our first destination was Dubbare, somehow Srinidhi was very keen to have a date with Dubare elephants as early as 5.30 am. I had warned about this at the time of planning itself that he was too optimistic and it’s impractical to find Elephants at the camp so early in morning. And my apprehension turned out to be true as there was no scope of doing any activity which reached Dubbare at 5 am ! Some of us including Srinidhi-the-driver decided to take nap in the parked car itself.  Seena had other priorities as he suddenly switched to toilet searching mode to execute his early morning cronjob activity. I also had to emulate Seena within half-an-hour as I could not find any other constructive activity because it was too dark to a timepass with photography.

With advent of daylight thing started getting brighter and one of the in-charge of Dubare Inn’s Hotel approached us and mentioned that boating to the elephant camp will start at 8.30 am and elephants will start coming for feeding and bathing at around 9 am.  He suggested us try out rafting at Rs.600 per head but after discussing secretly with the instructor he demanded handsome extra payment as day’s boni. Seeing their fickle behaviour we decided ignore the offer and decided to do timepass at some other location nearby till 8.30 am.

As per instructions from a cleaner of the resort, we explored no-so-well-known Chikholle Reservoir dam which is around 5 kms from Dubbare and it turned out to be very exciting part of the trip. When we reached the place it was completely covered with mist, sun was rising above the horizon in his usual pace his glare was spreading through the dense forest surrounding the reservoir. Within a few minutes the thick mist cover was cleared slightly and we walked atop and around the dam the dam doing photography sessions and witnessing breathtaking exhibition of the nature around a man-made structure. One of the unique feature of the dam was its semi-circular excess outflow section.

After the Chikiholle exploration, we came back to Dubbare had breakfast at Dubbare Inn. Then, thru a short boat ride we reached the actual elephant camp. There we waited for 15 mins for elephants to arrive. The arrival of elephants was sorry scene to witness as their fore legs were chained and they were proceeding ahead with a lot of struggle. Due to time constraints we just stuck elephant viewing option and didn’t go for feeding and bathing activities. 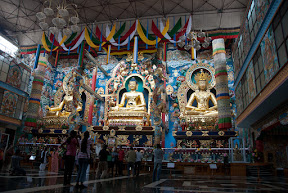 As per our plan we had to reach King’s Cottage around lunch time, so we decided to see cover places in and around Kushalnagar. First we visted Nisgara Dhama, a natural park on the banks river Cauvery. Since we had visited the place just for formality sake, personally I could not find any exciting stuff there. For people with families the place has many things to offer. Then, we visited Golden temple in Bylakuppe around afternoon time. The most surprising thing while entering the temple was that there’s hardly any security check of vistors. Nice to know that they have so much faith in god for security. Later on recommendation from someone in parking lot we visited the Sera Jey monastery which is three kms interiors from Golden Temple. Enroute to the monastery we witnessed the full fledge settlement of Tibetans right from doctor shop to chai shop.

After Bylekoppa we visited Harangi Dam even though having apprehension that there won’t anything exciting to witness there. The apprehensions turned into disappointment after getting there as the general public were not allowed inside the premises and photography was prohibited even from outside. It totally waste of time-n-energy as we had stretched up ourselves without doing fresh up activities from morning. 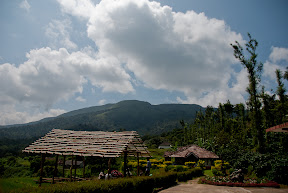 Then finally we decided to head towards the King’s Cottage(Kakkabe) via Madikeri and Napoklu. While getting there we would have approximately asked 20 passersby about the directions. Finally at 3.30 pm we were at King’s Cottage – a home away from home. After finishing long awaited fresh up activities, we had a sumptuous lunch served at the cottage. Around 5 pm we ventured out to see the palace and a private waterfalls in a coffee estate using a handwritten routemap given by cottage owners. The palace which looked very small from outside had many salient features like dark room etc. Next we explored the waterfalls inside a private coffee estate. General public are not allowed inside but for people staying King’s Cottage there’s no restriction as the estate is owned by relatives of cottage owners. The surroundings of waterfall was very pleasant and calm and devoid of usual rush in the public place. 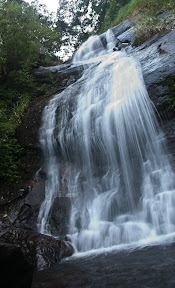 After experiencing the calm surroundings private waterfall we came back to cottage, had evening coffee did a general chit chat. While relaxing we were irritated by a different group staying next our rooms, who were with families and discussing their offices politics aloud along with fundoo tech jargons like cloud computing! Before dinner we discussed about the options for morning sightseeing with cottage owners. The major two options were trek to Tadiandamol peak and visit to Cheluvara Falls. We decided to take a call on based on our wake up time in morning. Later we hit the bed and slept immediately to flush off the sleep deficit which we had accumulated for last 24 hrs. 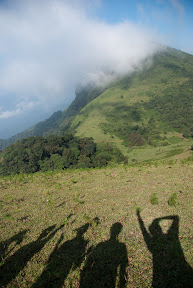 Next day morning since we got up around 7 am, Cheluvara Falls emerged as the unanimous choice as it needed less investment of time and one can go pretty close to the falls by own vehicle. While getting to the place we skipped a diversion to the Falls by mistake and later on while enquiring the way we got to know that there’s option to do a mild hiking at a spot ahead by name Kabbe betta. We decided to take a plunge and proceeded ahead. On reaching the place we discovered that there are two hiking options one was Kabbe Betta and other one was Cheluvara betta. Since we were off schedule from our plan, decided to climb Cheluvara betta. The decision turned out to be very appropriate as we witnessed Kabbe betta at opposite end getting covered on and off with patches of white clouds. Again a breathtaking experience both physically due to the hike and mentally due to the visual spectacle. The descent was not that easy because of slipperiness and we had keep every cautiously. But Seena had other thoughts,  at one point he suddenly switched from 1st gear to 4th gear for no particular reason. Later Sandesh speculated that it may be because of the motivation for getting the DJ’s seat ! 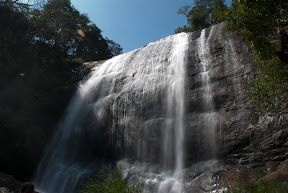 After completing the descent, we had sufficiently warmed up ourselves for the dip, so quickly we rushed to Cheluvara falls and rejuvenated ourselves by bathing in pure cold water  in downstream of the falls. While getting back to the care we did a brief visit to upstream of the falls also. Then, we came back to King’s cottage, had the breakfast served there as brunch and said goodbye to the wonderful cottage amidst picturesque mountains, coffee estate and paddy fields. 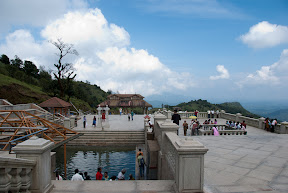 After leaving King’s Cottage we were off to Talacauvery the origin point of river Cauvery. There we offered prayers at the temple and climbed upto the viewpoint for which one has to ascend 300+ steps. The viewpoint is famous view of windmills, but when we were there none of them  looked to be operational. After coming downhill to Bhagamandala he had darshan at the temple and spent some at the sangam(confluence of rivers). Also, we had lunch at a KSTDC restaurant near Bhagamandala. 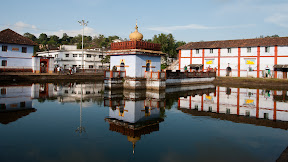 Time was 3.30 pm we rushed towards our next destination Madikeri. There we saw Omkareshwar temple from outside and did a brief visit to Madikeri fort. The fort at present houses DC office of Coorg district and and a mini-museum. The major items on display were memorabilia received by K M Cariappa – the first general of Indian Army. We started our journey back to Bangalore immediately after deciding to skip the visit to Raja seat due saturation of seeing various viewpoints within 24 hrs.


Return Journey
The return journey was race against time as we had return the car by 11.30 pm deadline. On the way back we had plan of seeing illuminated Mysore palace but due to time constraints, festival rush and series of security checks it was impractical to cover the place in time. So we bypassed Mysore by taking ring road and continued our journey towards Bangalore. In between we halted at Adigas(Maddur) for dinner. The place very crowded as expected and we had wait for 15 mins to get a table. After the dinner, we continued and entered the city thru NICE road. Srinidhi dropped us to nearest location to our homes to avoid missing the deadline to return the car.

The testing device Nokia N8 which Seena had brought for the trip was almost like a 7th person in the trip. Our Seena used to demonstrated its features throughout the trip. The FM transmitter feature was very handy to play songs in the car stereo from the device as we were relieved from inserting CD etc. Also ever-enthusiastic Seena took snaps with the phone’s camera at times when others were lazy to shoot with regular cameras.
Photo Album Slideshow