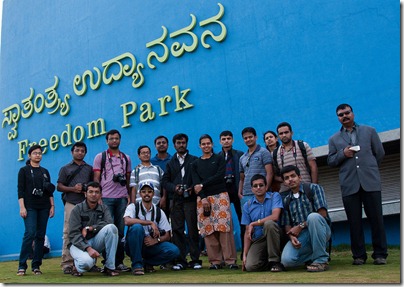 It was a calm winter morning on 9th January 2011. The major buzz in the city was about auction of cricketers for fourth edition of India’s most valuable league. In contrast, somewhere close to venue of the auction, a group 15 people had other priorities. They had gathered to kick start “Bangalore Loves Wikipedia” initiative, a series of photowalks in collaboration between Wikimedia foundation and Bangalore Photowalk(BPW) FB group.

BPW FB group ?
Yeah you read it right ! Sometimes we have to be very specific. The photowalk activity in Bangalore was initiated in year 2008 by a voracious blogger Karthik Shashidhar. The idea was actually imported from a similar initiative in Chennai by blogger Chandrachoodan(source). In  those days, I mean in pre-FB and pre-twitter days Karthik managed to get on board around ten people for 3-4 monthly photowalks through his blog and BPW yahoogroup. Later, when he moved out of Bangalore, I took over the baton and organized a few walks by explicitly adding the concept of ending the walk at a low brow eat-out. Coincidentally,  I was also out of the city for 2 years and the dedicated yahoogroup turned inactive and BPW lost momentum. After moving back to the city, I rebooted the group on a different platform where most of people spend their time and socialize virtually. In between, there have been several avatars of “Bangalore Photowalk”. A few of them were organized by Bangalore based social networking start-up which was recently acquired by a company which is famous for chain printing solution outlets. There are a few groups in flickr also and but most of them have been inactive for long time. Whatever may be the case, the major aim of the FB group is to harmonize all groups in silos and organize photowalks with different themes through collaborative approach.

Next Photowalk ?
It will be in Basavanagudi ! We will start by having breakfast Brahmins’ Coffee Bar and cover various landmarks by cris-crossing in Basavanagudi. Find details at Facebook event page.