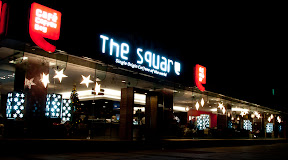 We repeated the new year day episode of 2009, i.e. early morning hike of Skandagiri to witness first sunrise of the year. In this episode, Ciju and Tejinder were in our group, apart regular folks myself and Hemanth. We followed the same pattern like snacks at Food street, year switch celebration around Cubbon Park at UB City, CCD's 'The Square' and followed by visit to Skandagiri.

Unlike last time the major part of the drive to Skandagiri was comfortable .. thanks to good condition of NH-7. But, we faced a few hiccups en-route to the base of peak. Firstly we missed out the right deviation from NH-7, however after proceeding ahead for a few kilometers we managed to find another deviation to Chickballapur after a U-turn. It took us to Gowribidanur junction of the town and from there we took the usual route i.e. left turn after APMC market and right turn after the dead end to reach Papagni Mutt. 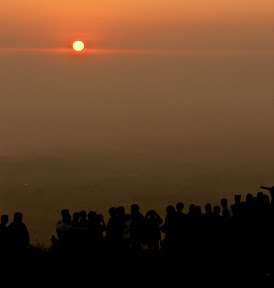 On the way, we had to pay an amount of Rs. 100 per head to forest guards. This happened after a slight melodramatic incident with local villagers who stopped us before forest department check-post and promised us to take to the top through an alternative route. We had almost decided to go ahead with them, but had to backtrack due to series of dramas. In the end going ahead by paying up forest officials turned out to be a wise decision. We formed an on-the-spot group of thirteen along with other visitors and made a deal of Rs. 1300 which was inclusive of guide charges.

Our ascent started at 4 am and getting to the top was challenging as usual but this time we were well equipped with one torch per head to make our life easy. The terrain was slippery in relative to 2009 conditions, due to loose soil at several places. But, enthusiasm to witness sunrise motivated us to overcome all obstacles.

After reaching the summit at 6 am, we settled at a strategic location to witness and capture the memorable sunrise. Finally at 6:45 am, the most awaited sunrise happened and close to 200 people atop the peak celebrated it with cheers and shouting aloud HNY 2011 !

After doing experimentation with photography from the strategic location, I moved around to capture pics of other subjects. Funny incident happened when I was shooting the shadow of the peak on the other side, a group drunk people besides me started commenting on my act :P.. "Man this guy is crazy .. trying to shoot that distant lake from the top .. He can go near the lake itself.. Is he trying to capture fishes in the lake ?"

After spending sufficient time at the peak we started our descent. The slipperiness in patches made the task difficult. We managed somehow with crossed legged (Ambarish style) of walking. We were back to the starting point i.e. Papagani Mutt at around 9:15 am and started our drive back to Bangalore. In between we had a power-nap pit stop near Yehlanka to ensure that our Hemanth - the man on the driver seat to be in the right condition to take us safely back to Bangalore city.