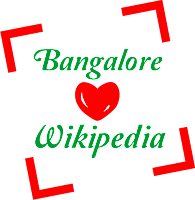 Valentines day is around the corner ! Many people across the globe would already be bothering what to present as a gift to their valentine and people who don't have a valentine would be dejected by a having a continuous daemon running in their mind "Yet another V-day without a V". However, the members of Bangalore Photowalk group were involved in a better business last weekend. They selected their valentine to be world's largest collaborative encyclopedia i.e. by involving in second edition of Bangalore Loves Wikipedia event, an initiative which was kick-started only last month.

The second edition of series of photowalk was held at Basavanagudi, one of the oldest localities in Bangalore. The agenda of the photowalk was to cover major landmarks and sites of the locality, capture them and contribute photos to wikimedia commons. As per plan, we started the walk by having breakfast at Brahmins' Coffee Bar, one of famous low brow eat-out in the city. The response to the event was overwhelming. Totally there were 28 participants, a kind of record w.r.t to photowalks in Bangalore.

In order some sort of sanity in the activity we divided ourselves into 2-3 groups. My old-time photowalk buddy Sandeep Gokhale lead the first group and I managed the rest. To have comprehensive coverage I along with Srinivas decided take the alternative route thru Maratha hostel. On the move we shot various landmarks and spent quality time at Ramakrisha Ashrama, Vivekananda statue circle. Array of red+yellow flags of Karnataka which were put for the occasion of Kannada Sahitya Sammelena gave a unique look to the place. Futher ahead, we observed that front facaded of famous sugarcane juice outlet Cane-o-la was also decorated for the occasion of sammelana.

Proceeding ahead we reached the famous Bull Temple and decided to conclude the walk officially after a group photo and distribution of wikipedia badges by Hari Prasad (HPN). Later, many participants had an extended photowalk on theier own in Bugle Rock Park and Gandhibazaar. Thanks you all who participated in the walk and making event a success, especially people from far off places such as Hebbal, K.R. Puram.

Please do visit FB page - Bangalore Loves Wikipedia .. and encourage us by LIKEing the page

Also, read about the event at: