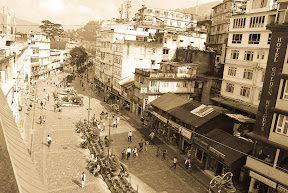 Major Highlights:
Gangtok as Base Location :
The initial part of the trip was dedicated in hunting a good deal for package tours for North Sikkim and Nathu La trips. After a series of negotiations with various tour operators in M.G. Road we decided to go with Lama Tours and Travels for both trips. Permits are essential for both trips and one has to submit photographs, identity proofs in advance for processing the permits. 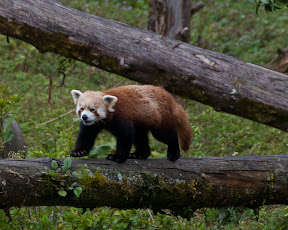 Our east sikkim trip kick started with Gangtok sightseeing.  Large utility vehicles(Sumo, Innova) with taxi number plates don't have permits to roam in the city. So for a group of six we had to opt for two Maruti Omnis. We visited Flower park, Hanuman Tok, Ganesh Tok, Zoological Park, Tashi Viewpoint, a Monastery, Bakhang Falls and some viewpoint near Assembly house. Flower park was decent, where we got opportunity to shoot lot of orchids. Hanuman Tok and Ganesh Tok gave us difference perspective of Gangtok City. We spent quality time at Zoological park. The major attraction there was Red Panda - state animal of Sikkim. Tashi viewpoint was disappointing as we had been there at wrong time. Manoastery was decent and it was too dark by the reached the viewpoint near Assembly house.

M.G. Road:
It's major road of the state capital with 100 percent foothpath. A casual walk in evening time is a must on this road. Famous eat-outs here are Roll House for Momos and Baker's Cafe for European stuffs. Don't miss vanilla shake and pastries at Baker's Cafe. 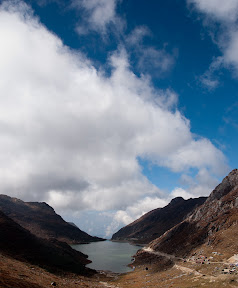 It's a one day dedicated affair and as mentioned previously one has to get permit for this a day in advance. Our trip started as early as 7 am. On the way our destination, first few kilometers from Gangtok the army settlement in the region noticeable - constantly passing by gigantic army trucks in opposite direction and army quarters adjacent to the roads. The only significant thing on the bland structures were DTH antennas of various service providers .. truly satellite TV has come of the age in India ! Our first destination was Nathu La. On the way we passed by Chaggu Lake and a place called Thegu where there's world's highest ATM !

The unique terrain was first time experience for me i.e. full off landslide prone areas. Every 2-3 kms one can find Border Roads Organization(BRO) people at work and clearing off debris if any. We were welcomed in Nathu La with decent sunny weather with white patches of clouds. It was a maiden experience of 15000+ ft for me and even a brief ascent by steps to the army post was exhausting. In front of army canteen, jawans had kept various ammunitions like AK-47, bazokaas for display and we grabber the opportunity and took photographs with it by holding the stuffs in our hands.  We had coffee break at the army canteen and took Nathu la certificate by paying 50 Rs at the same place. 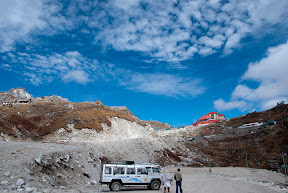 After talking the certificates went upto edge of Indian border. It was like this side in India and that side is China(Tibet). One can easily distinguish contrasting structures on two sides. Indian side was decorated with images of Taj Mahal and other colorful images depicting cultural richness whereas in Chinese side it was just a bland building with grinning soldiers roaming around it. However, one among them looked to be very curious and was taking pictures of tourist on Indian side with his point-n-shoot. There was not even a single tourist on Chinese side. One reason mentioned by a jawan was that for them the nearest city to Nathu La is around 400 km and on Indian side it’s only 50 kms .i.e Gangtok. Also, it was interesting note that within a distance of two feet there was a time difference of 2 and half hours !

After completing Nathu La visit, we came downhill and visited Baba Mandir. Initially, we had thought it was place of worship of some saint. Later we figured out it's a temple dedicated to some army jawan by name Harbhajan Singh. One fine day he came in dream of his peers after his death and they made a temple dedicated to Baba-the soldier. After the temple visit, we came to banks of Chagu Lake and took photographs by sitting on yak. We had late lunch at a small hotel near the lake where we had normal stuffs momos, noodles. After lunch it was time for return journey by evening 6 pm we were back in Gangtok. 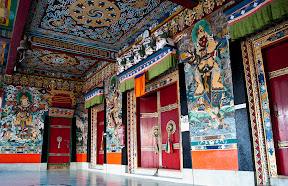 We visited this Monastery after after completing the North Sikkim trip and on the way to South Sikkim. The places of interest were prayer hall and the golden stupa. I was extremely fascinated by significant and history of the Monastery. At this place there's a thrown of Karmapa who's currently in a exile at Dharmashala. But Indian government is not allowing him to sit on this by considering sensibilities of Chinese. I discussed all these stuffs with one of Lama of the monastery and who requested us not to take photos of mask which were being prepared for Tibetian New year. Before departing from the Monastery we had Veg Thupka - traditional delicacy of Sikkim at a canteen just adjacent to premises of the monastery.
at Thursday, March 31, 2011