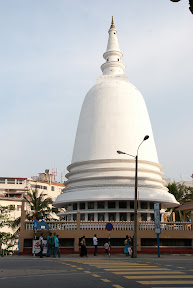 Key Highlights of the trip:

FAQs: Please refer Srilanka Weekend Trip- FAQs by Srinidhi Hande
Initial Planning:
Sometime in December-2010 my blogging buddy Srinidhi Hande shot a mail to people in his network announcing that return tickets from Chennai to Colombo on then recently started Spicejet service were available at a mouth watering price and in turn invited everyone for a experimental weekend trip to Colombo. The flight timings were convenient for people staying in Chennai i.e. leaving after midnight and returning just before early morning. For Bangaloreans like me there was an overhead of 6 hrs train journey or an aggregate 3 hrs flight journey. Since most of potential trip participants were from Chennai, I had to hunt for someone to accompany me from Bangalore. Many didn’t show interest in the trip as one can’t do justice for places in Sri lanka in just two days. Finally, my reliable travel buddy Ande agreed to join me for the trip. For Bangalore-Chennai part we decided to travel by his car.

Planning Phase-2:
If it’s a trip organized by Srinidhi, one is assured to be part of comprehensive brainstorming. We had an initial plan for seeing place in Colombo only. With some basic research we realized that it’s not really worth to spend entire two days in Colombo instead one can do a day trip to Kandy. Discussions continued and some people in the group posted queries to their friends in Sri lanka. I also pitched by buying PDF chapters of Lonely Planet. The Hill County chapter was very handy in researching about places of interest around Kandy.

Actual trip: Bangalore-Chennai
The driving plan from Bangalore Chennai plan got screwed because on the day of journey Ande had some important meeting in Noida. So he decided to directly fly from Delhi to Chennai.  Therefore, I opted for the evening 6.20 pm flight from Bangalore and landed in Chennai at 7 pm. After landing in Chennai I had wait for Ande as his flight from Delhi was delayed. In the mean time Srinidhi and his friends joined from Chennai and we had a light dinner at Sangeetha food court just outside international departure terminal.

Departure from Chennai:
After the dinner we started the proceedings for the boarding. The environment of the Chennai airport reminded us that Chennai is still a AAI managed airport. One has to stand in a queue for X-ray scan before the baggage check-in. We were taken aback by a long queue for the process, there was a big group of around 90 elderly ladies who seem to be returning back to Sri lanka after their trip to India. And not to mention, I had to wait behind such a big group for my turn

Somehow we managed to clear the X-ray screening process. Thanks to Ande as he accompanied me in the queue, inspite of not having his own check-in bag. The immigration clearance and security check were completed smoothly. At an outlet in between Immigration and Security check Srinidhi and Vaideesh took Matrix SIM cards for rent ( Read more about Matrix experience at Srinidhi’s blog). The flight was delayed by one hour and the departure was rescheduled to 1.10 am. We got into some eat-out and ordered for coffee/tea at regular intervals just to kill time.


Flight journey and Arrival at Colombo:
For convenience we(myself and Ande) had opted for emergency-exit row which usually has 1.5 times of normal leg room. The window seat in the row is a value add, since you will get special instruction from the hostess and a chance to build rapport :). After around 1 hour flight journey we landed at Colombo. The major curiosity was that how the immigration process will turn out be. For me it was first time experience of visa-on-arrival. At the immigration counter the person just stamped on the stamp next to Indian immigration seal and the formalities were over in a jiffy ! The Colombo airport had more glitters than Bangalore and Chennai airports. It was very evident that some event like 'world' cup was happening in the country as all interiors jazzed up with flags of participating nations.

Just before exit of the arrival terminal, I used my prepaid travel card to withdraw money in Sri lankan rupees(LKR) and Srinidhi’s group exchange their forex from USD to LKR. Also, there are array of outlets of  Sri-Lankan telcos where one can buy pre-activated SIM cards. I had brief discussion at tourist information center and got to know that Nuwara Eliya is a place-to-be in Sri lanka and it was exactly in sync with the contents in lonely planet guide.