This post is continuation of SriLanka Trip: Planning and onward journey 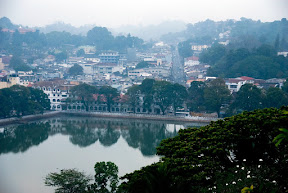 As per our initial plan, on Day-1 we were supposed to do sightseeing only at Kandy and return back to the Colombo/Negombo by taking Inter-City express at 3 pm. But after reading about Nuwara Eliya in Lonely Planet guide and subsequent recommendations from Tourist Information center we had to think about plan-B. Mr. Kapu, our driver of the taxi which we had booked in advance for the Kandy trip also acknowledged positively about our plan-B by saying morning at Kandy, afternoon at Nuwarilya and back to Negombo in evening/night. However, we decided to keep the itinerary flexible and take a call on A or B after getting to Kandy.


We boarded our taxi Toyota Hiace (which was like a big Maruti Van) and started our drive towards Kandy. Majority of glow-sign boards outside Bandaranaike airport were dominated with ads of an Indian based telco which had then recently re-branded itself with a new logo. Other noticeable thing around the airport was commandos zipping in their bikes and ordering people not to park their cars. Surely, the island nation is still not recovered from their recent past. Further ahead the roadside houses and shops had very strong resemblance to those in any coastal city in India. So the "Outside India" feeling was not really created. Most part of three hour long journey we tried to annul our sleep deficit and in between had a stopover for tea (sugar syrup) at a road side hotel. 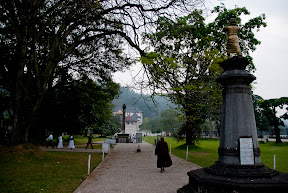 On reaching Kandy we witnessed that the roads were brimming with people as early as 6.30 am. Our sightseeing kick-started with a visit to city viewpoint. The weather was sufficiently clear and majority of the view was dominated by the lake of Kandy. After spending brief time at the place we headed towards the famous Tooth Relic Temple. Had read a lot about the place in our history books and we were at the place in actual. For a while it was not digestible and needless to say that the "Outside India" was finally set.

One has to undergo two levels of security check in order to get into the temple. At the first level after formalities the security guard asked me “India ?” and he reciprocated to my yes with a thumbs up and said “ok ok” to my camera. After clearing level-1 of security we entered into garden of the temple with lush green lawns and huge trees. For a moment it was like we are into a botanical garden. The early morning settings with birds and squirrels doing their daily chores was picture perfect. Moving ahead, we cleared the second level of security to enter into actual temple premises. We had to leave footware at a designated location of foreigners which was next to the ticket counter. The entry fee was 500 LKR for vistors from SAARC countries and no fee for cameras. 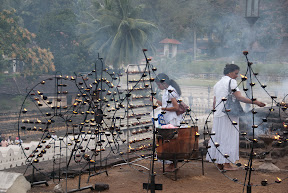 One can witness numerous local people entering the temple with a big lotus which is a traditional offering while performing pooja. In front of entrance to the tooth relic i.e. core part of the temple, an elderly gentleman approached us and quoted 200 LKR for guide charges. He briefly narrated the long history of the temple and it was interesting know about legacy associated with the tooth relic. Buddha’s tooth was secretly hidden in some queen's hair ornament and was brought into Srilanka. The story was depicted through a painting in a hall with a series of paintings. In the same hall there were collection of Buddha statues donated by various foreign dignitaries and our guide pin pointed to statues gifted by various prime ministers of India.

There’s a small museum within premises of the temple where photography was not allowed. The exhibit included a few antique collections but overall it was dominated by photographs depicting the impact of LTTE suicide attacks which had partially damaged the front facade of the temple. Just besides the main complex many people predominantly in white dress were lighting lamps as part of their tradition. 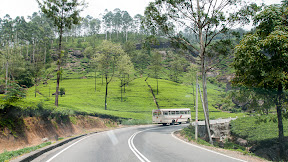 After completing early morning visit to the tooth temple we decided to execute plan-B i.e visit to Nuwara Eliya. Before that we decided to have breakfast and unfortunately we could not find any proper eat-outs around the temple premises. Our driver Kapu took us to a hotel complex outside Kandy towards Nuwara Eliya. The place was decent but the food court there was closed, so we had to manage with the biscuits bought from the supermarket in the same complex. Some of us decided complete pending morning ablutions by renting a room by paying 1000 LKR. Our driver Kapu was slightly pissed off with one hour stopover and escalated that it's not possible to return back to Negombo by evening as he's been awake from 1 am last night and he doesn't have the habit sleeping in a car like normal drivers. He proposed that we can stay overnight at either Nuwara Eliya or Kandy. On hearing this Srinidhi thought of reverting back to plan-A because we had booked an accommodation in advance at Negembo. However, I managed to convince Kapu with some minor blasting that we are not totally responsible for his sleep deficit. So the plan-B was alive and kicking ! 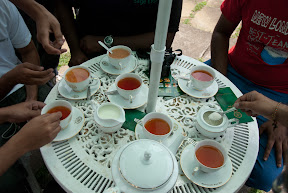 The journey to Nuwara Eliya was nice thanks to well maintained roads. With over 2 hours of journey we reached the place which is often regarded as 'Little England'. Our first destination was Labookellie tea center. There we started with a tea factory tour which was established in 1840s under the supervision of a lady guide. She explained us specialty and significance about high altitude tea. The factory visit was informative and the complementary tea offered after that was awesome. It was easily the best tea had in my lifetime. 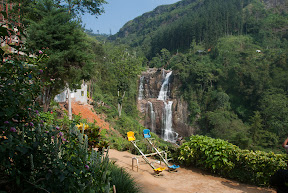 Our chennai boys had a brief conversation in Tamil with the lady guide who was happy to discuss about her Indian origin. After the tea center visit we started our downhill journey towards Negembo.

Ramboda Hotel
For lunch, we had a stopover at Ramboda hotel, a lonely planet recommendation. The most significant thing about the hotel was that it had a view of waterfalls with the same name. Though there were limited menu options for vegetarians like me, we were impressed by prompt service and friendliness of the manager. The hotel is bit downhill from the main highway. There's a dedicated van which offers free downhill/uphill ride, of course by giving a tip to the driver.