The race in which everyone is a WINNER !

Only 500 meters to go !!! yells one of the volunteers from the organizing team and subsequently you will see dozens of people on both sides of the track cheering at you providing you some kind of electric energy that would be sufficient to make you sprint remaining distance in spite of being in totally exhausted mode with sapping legs, sweaty body, spinning head. In full josh you crossover the finish line with feeling of being a winner in the race and the same is the case for all thousands of participants in the running event.

On a mission to burn some calories

It started with a humble beginning in 2007 with my friend Harsha with a casual jog in Lalbagh garden. And as expected it was quite challenging in beginning. First of all I didn't have proper shoes, proper running clothes and used to start panting with huffs-n-puffs after running a few meters. The stamina which I used to have in my teens was all gone but as always I didn't give up and the mission of burning additional calories put-on after 25+ age made me continue. It went on a discreet way for years and I was never serious and disciplined. Not to mention, the fat content in my body kept on increasing at gradual rate. 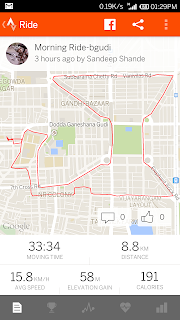 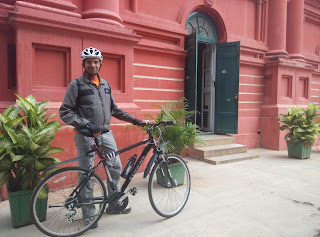 Since my running/jogging were going no where, I decided take a plunge into cycling in Feb 2014. Even though it was not about running it helped in shedding many mental roadblocks and annuled consciousness of going around my home in a sports wear etc. In the process of recording my ride I came across Strava App which presents your sports activity stats interesting ways and connects you with fellow fitness enthusiasts who regularly run/cycle on your trails. Sometime these kind of things would be sufficient to get off from the bed in mornings and motivate you to give your best at a particular trail. Read more about my cycling experience at Cyclopedia.

Participating in a Big Event

In first half of 2014 when the plump on my body seem to be crossing threshold limit, I got into serious fitness regime with my friend Seena. We used to alternate from running, terrace gyming badminton and cycling. And in the process of maintaining the momentum we became serious about participating in a big event.  Had thought of participating in Bengaluru's annual TCS World 10K event. But as the time passed by we started procrastinating and missed the last day of registration. Aftermath of this, as a knee jerk reaction I registered for inaugural edition of Bengaluru's official marathon. Later, after getting busy with my new job and new phase in life, I totally forgot about my preparation for the event. Finally, when I got a reminder mail for the event for collecting the BiBs I got to know I need to run in a big event and there was ZERO practice till that time. Well, one fine Sunday morning, 2 weeks before the race day and also in mission to shed some weight for my marriage which was 4 months away, I decided to do some serious jogging at Donkola grounds near my home. The feeling was awesome and it continued for next one week ! and I was able to run continuously for 3 kms in a routine workout session. 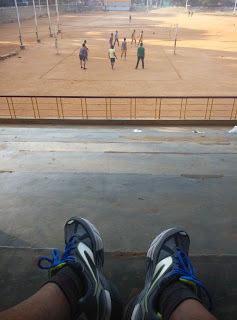 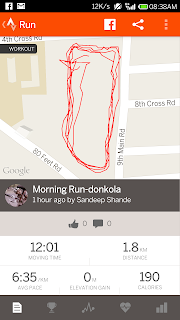 Just do a brisk walk

Two days before the Bengaluru Marathon, at a team dinner with my colleagues, from usual discussions we switched to weekend plans and obviously it came about my participation in marathon event. One of my colleague started probing me about my practice sessions etc. Hearing my response other colleague starting comment people started demotivating me that I will be booed by spectators etc. They even jumped to conclusion that I will be running the marathon event just to impress my fiance :) only positive takeaway from the dinner meet was I got tip-off from one of colleagues that I can complete 21+ kms just by doing brisk walk :). 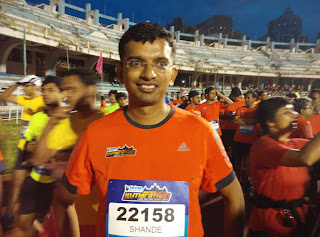 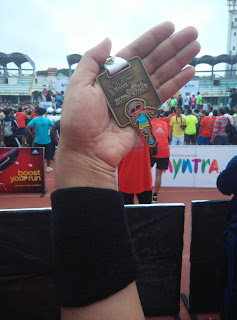 Without any significant practice with only self confidence I assembled at the Kanteerva stadium at 5 am in morning. There I met my colleague Rajagopal who had come all the way from Chennai to participate in the big event. Being a regular marathon runner, he gave a few crucial tips like not aiming for pace, importance of hydration and I just need to aim about completing the race. The race started with huge cheer from participants and for me it was all first time experience. Running with thousands of people is an experience to cherish. Half walking and half running I managed to finish the race in 3 hrs +. Yes, I completed 21 kms in my very first attempt. Till date I seriously don't know how I managed to do so ! and icing on the cake was doing hi-fi with my soon-to-be after crossing the finishing line ! :)

Feeling of Being in the League

First 2-3 days after Bengaluru Marathon event were very tough. I could barely walk around and used limp around at my workplace. Had almost thought of giving up running till my marriage. Later, in run-up to intra-company running event, I got to know many tip offs from experts in running club "Cursors" at my workplace. Some of the important takeaways were : How running in asphalted roads in better than running is parks/grounds, How the design of the shoes is critical for sustaining running in long term. Without any second thoughts, I immediately ungraded my shoes with better cushioning and right design for my pronation. Well, intra-company running event turned out to be a cakewalk and I managed to finish the run in 1 hr 10 mins flat. Finally, it was like feeling of being in the league of running enthusiasts ! 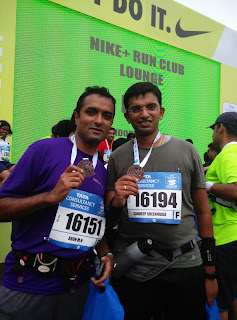 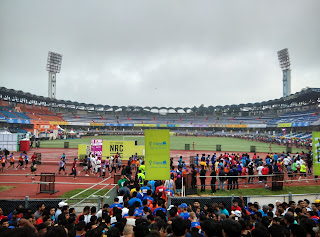 From then it's been no looking back. Recently, participated in TCS 10K 2015 and also in inaugural edition of Bengaluru 10K at NICE Road last week.