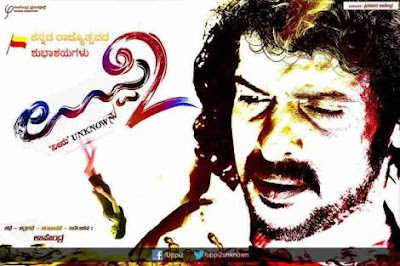 Uppi-Two is the latest flick in Kannada film industry by multi-talented filmmaker Upendra who is known for his creative narratives and unique perspectives. The movie is the sequel to the movie titled by his good name which release way back in 1999. I was so much inspired by the film that the character "naanu" turned out to be the major factor for the naming of this blog. The director made an attempt to quench the expectations of his fan through his directorial comeback "Super" in 2010, but it was not that well taken by his fans like the 1999 flick.

In contrast, his latest venture got several rave reviews. It was the talk of town several things and one common one being title of the movie, which is homonym to one of the common cuisines in Karnataka Uppittu - ಉಪ್ಪಿಟ್ಟು. Due other priorities, I could not experience the narrative immediately after the release. After a long wait I finally got a chance watch the film with my blogging buddy Raveesh at the new multiplex - ETA Cinepolis close to my home.

The plot of the very difficult to explain in fact the director has left to the audience for their own interpretation. In comparison to the first version, the sequel is more polished, refined and tending more towards philosophy. However, the music of the movie is a bit letdown.  The magical tunes like MTV Subbu Lakshmi, Uppi kinta bere ruchi illa, Mastu mastu Hudugi were missing in this movie.

Regarding my interpretation of storyline I still need to converge and will update this part after thorough analysis :)

Kindly refer following links for interpretation and reviews
An aside:

The new multiplex ETA Cinepolis is a welcome change to people staying around Charamrajpete, Basavagudi, Hanumanthanagar area. Leaving apart Uma talkies we didn't have any proper place for experiencing a movie between Urvashi and Eshwari theaters. The ETA namma mall just had a soft launch with only multiplex and other shops may start operating from Jan 2016 onwards.