Madhur Bhandarkar whose movie about Mumbai's party animals 'Page 3' had bagged National Award. There was one joke what would be title of next movie of Madhur Bhandarkar - in Hindi it would be 'Page 4' or in Urdu 'Page 2' :). So this Page 4 or Page 2 is about Corporate world. 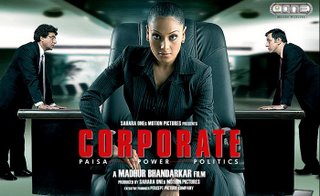 The movie Corporate projects on silver screen many incidences which actually takes place inside Ivory Towers of Corporate World.
Film breaks new ground in deparment of subject(plot). But the way of execution and presentation is same as 'Page 3'. One similarity which can be mentioned in Page 3 there were drivers discussing about their Boss (Party animals). In Corporate its the job of office peons and bodyguards.

I feel its not right to continue with futher discussion about full story line. Its already done by various crictics of our Bollywood. Lets review their reviews.

- Taran Adarsh (indiafm) : 3 star : His review cant be said neither generous nor harsh. But I was suprised to see 3 star from him in spite of 'indiafm' being overseas media partner for this movie. For this reason may be flaw of movie was not mentioned.

- Rajeev Masand (cnn-ibn) : 2 star : As usual Rajeev Masand is harsh. One can see response to his review in ibnlive.com, he reviews as if he is the Speilberg :). But he has pointed out basic flaw in moral of the movie. Nishigandha Dasgupta (Bipasha) mentioned as innocent . But actually as per Rajeev "She's not paying the price for her ambition, she's paying the price for being deceitful."

- Sukanya Verma ( rediff) : 3 star: She has mentioned about proposed romantic track between Minissha Lamba and Sameer Dattani, which never takes off beyond an invitation for coffee.

Overall a good movie, must watch for everyone in industry. Techically movie is not so good, so not paisa vasool at multiplexes.

So moral of the movie : Guys control your harmones otherwise you may lose your job. Gals you may have to pay the price for being deceitful.