KANK - Kabhi Alvida Naa Kehna is lastest movie of Karan Johar(KJ). The hype had build up for this movie over a month. Expectations were high due to many reasons such as star cast, music etc. 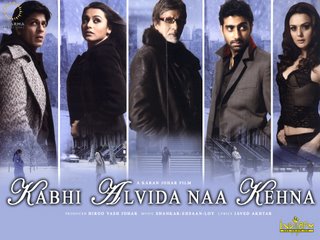 
This was the forward which everyone received few weeks back revealing plot of movie. From where this e-mail orginated? whether it was publicity stunt created by producer himself ? Anyway this e-mail had created curiosity among movie buffs.

Now lets talk about the movie.

The plot of KANK is based on infidelity(the quality of being unfaithful). It raises a question "What do you do if you find your soulmate after marriage? ". In a recent interview Karan Johar said that he had overheard a couple's breakup conversation at London which was happening with dignity. They were mentioned was pinpointing each other's positives are negatives. This incidence motivated him to make a movie about marriages which are falling apart.

So how is KANK overall?
KANK is a average movie but the plot very different from previous KJ ventures, with good combination of style and substance. It has a stamp of usual bollywood masala movie such good songs, exotic locations. The length of movie(22 reels) is too much. Screenplay is engaging (better than Krrish, Fanaa) doesn't make viewers to run out of hall except for last 20 minutes where it is dragged on an on. Some people may find it boring so be mentally prepared in case you are planning to see movie.

The story of movie revolves around 2 marriages
- In one emotionally impulsive, outgoing Rishi(Abhishek) is tied up with no so outgoing Maya(Rani). Their marriage is mainly a compromise. Also Maya doesn't have any passion towards Rishi.
- In other case Rhea(Preity) and Dev(SRK) marriage is also falling apart. Dev a soccer player has suffered a career ending injury. So Rhea is bread earner for the family and also claims 'Is ghar me mard mai hoon'

Performances of actors are good, all of them have done justice to their character. It would be unfair to compare their performances. To say atleast I liked Preity's role. Eventhough her role is not so much but her character is powerful.

Songs composed by Shankar & Co are good and are picturised in a nice way. Some of them are situational and others are meant for relief. 'Wheres the party tonight' really brings relief in second half.

Some of the scenes, sequences are amazing and skillfully executed.
- Rani and Preity approaching SRK from across the road, both unaware of the other's presence. 10 out 10 to director for this sequence.
- Shah Rukh in Kiron Kher's birthday party expressing his feeling about Rani, finally saying it as humour and subsequent facial reaction of Amitabh is too good.

Cinematography is good but not awesome, the reason may be that location is not fresh. I am bored of seeing Mahattan skyline again and again after 9/11 incident. Karan wasn't there any another location where you could have shot this movie ? Hope you find different and fresh location for your next movie.

Now its time review the reviews of bollywood critics.

Taran Adarsh(indiafm): 4 and 1/2 star : As usual Taran has given biased review. His rating mainly indicates possible commercial sucess of movie. Anyway the rating too much for a average movie.
Excerpts
- the spat between SRK and Preity on one hand [Preity: “I wear the pants in this house”], followed by the heated argument between Abhishek and Rani [Abhishek: “You can't even bear a child”] is amongst the most remarkable portions in the film.

Rajeev Masand (cnn-ibn): 4 star: This review aired on friday 10.30 pm on cnn-ibn had raised my expectations about the movie. Masand rarely gives 4 star for a bollywood movie. His ratings for recent blockbusters Krrish (2 star) , Fanaa (1 star) were very less relative to KANK. I am suprised that a critic like him was not able find any flaw in the movie. In comments to his review in ibnlive.com someone has said "I am not disappointed with the movie because Karan Johar never makes a movie in classic sense of a word, he makes a product that should sell well. I have more problems with Masand's review that got me into watching this."

Excerpts of review
- KANK unabashedly holds a mirror to everything that's wrong in modern marriages.
- Unlike the protagonists of his last film Kabhi Khushi Kabhie Gham who were all good-as-gold and pristine clean and merely conflicted over a misunderstanding, the characters in Kabhi Alvida Naa Kehna are damaged goods. They're confused, they're complexed, and they're hurting as hell. As a result they do all the wrong things and they say all the wrong things. And really, that's what makes them both relatable and endearing on screen.
- Unarguably the film's central source of comedy is Amitabh Bachchan playing Abhishek's randy father with a voracious sexual appetite.
- Few writers have such solid control over their screenplay as Karan Johar does. Few understand the intricacies of narrative as well as he does.
- Johar goes from highs to lows, from plateaus to peaks with the ease of a pro. He knows exactly how to turn a seemingly ordinary scene into something special with just that one line of dialogue, or that hint of background music.
- While it's bold and treads new ground as far as Karan Johar's themes are concerned, the film also relies heavily on trademark Johar dependables like eye-watering cinematography, impeccable production design and extravagantly filmed songs.
- And therein lies the real risk and ultimately the real success of Kabhi Alvida Naa Kehna - Johar tackles an uncomfortable premise but very much within the parameters of your masala Bollywood potboiler and with all the trappings in place.
- The film's ensemble cast plays off each other comfortably, and never once slips out of character in a bid to outdo the other.
- Distancing himself from the kind of melodrama he's subjected us to in the past, Johar goes for more subtle emotions this time. His characters may still wear designer tags but they're all grey and they've messed up their lives.

Raja Sen (rediff): 2 star: This review is too harsh.
Excerpts
- Couples on the verge of marriage would do well not to head into the theatre. You may be dumped for the choice of flick.

Sarita Tanwar (Mid-day) : 3 and 1/2star: I feel Sarita is die hard SRK fan.
Excerpts
- Beg, borrow or steal — but this movie experience is a must. Watch it for its bold and beautiful content; watch it for the maturity of Karan Johar; and watch it for Shah Rukh Khan’s ever-lasting performance. KANK is the biggest celebration of this season. ( this indicates that KJ might have paid Sarita for writing review )

N. K. Deoshi (apunkachoice.com): No rating: This is closer to my view about movie. Author has found out areas in which the movie lacking.
Excerpts
- the movie oscillates between two extremes – fun and melodrama. Perhaps that is Johar’s idea of a well-balanced film.
- The fun part is entertaining, no doubt, particularly when it comes from the two Bachchans.
- It is the melodrama, the rift in marriages, the tiffs between spouses, the repeated talks of rishte, jazbaat, love and pain that becomes superficial after a while.
- Amitabh Bachchan, whose performance is the most appreciable in the film, is ironically the most overdressed, except when he is in bed with some firang babe.
- Frankly, KANK makes you no wiser about marriages or relationships.

To conclude KANK is not a memorable movie overall. It can be remembered for breaking new grounds, drifting away from traditions saying 'If the marriage isn’t working, divorce is the answer.'

If you have managed to read this post till here, I am sure you would be able sit in theatre for 3 hrs 10 minutes.

So whats your opinion about KANK ? Post it as comments....