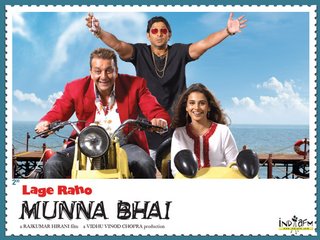 Goooood Morninnnnnnnnnnnnnng
Munna and Circuit are back with a different story.

In previous episode Munna had treatment for people's diseases, which even doctors didn't have. In this episode he solves people's personal problems using Gandhian principles. His love interest this time is World Space RJ Jhanvi(Vidya Balan).
Movie scores in imagination department. The way in which so called 'outdated' principles of Gandhiji are presented to audience.

Throughout the movie audiences are treated with excellent comedy with good dialogues. Brilliant comic timing and dialogue delivery add value to dialogue. It is very different from some of recent movies where dialogue mainly contained either sarcasm, expletives or silly jokes.

Music of the movie is ok, but one doesn't feel songs forced into screenplay. picturisation and placing of 'Pal Bar Har Pal' is good.

Real hero movie is screenplay and story. It is engaging from the word go. Hats off to Raju Hirani and his team for deft execution.

Saying LRMB as 'paisa vasool' would be an understatement. Its much more than a 'paisa vasool' movie and definitely worth watching. In my opinion movies of this kind would not have been made in Hollywood also till date. In bollywood its very rare to have movies with repeat value, LRMB will be one of them.

One blopper:
In the movie one can see policeman listening to worldspace radio in his jeep. world space is a satellite radio station which requires fixed antenna, technically it is not possible to hear worldspace radio in a vehicle. Considering cinematic liberties and quality of movie this mistake is negligible.


Excerpts from reviews of famous critics.

Taran Adarsh(indiafm): 4 star
- Like its predecessor, LAGE RAHO MUNNABHAI is a sparkling example of qualitative cinema.
- The comic portions are executed with panache, the drama is attention-grabbing and the emotional quotient is strong enough to turn you moist-eyed.
- Indisputably and undeniably, this Munna-Circuit outing is worth the price of the ticket and more.
- Dilip Prabhavalkar [in the role of Mahatma Gandhi] is up to the mark. However, the makeup could've been better.
- the USP of the film are portions between Mahatma Gandhi and Munna, which is a brilliant stroke from the writing as well as execution point of view.
- the strength lies not just in Munna and Circuit's chemistry, but also reliving the teachings of the Father of the Nation Mahatma Gandhi.

Rajeev Masand(cnn-ibn): 4 star
- You know some movies just strike a chord from the word go, and Lage Raho Munnabhai is exactly that kind of film
- It's evident that the film's main motive is to give you a good time, but it's commendable that writer-director Rajkumar Hirani chose to weave a message into the story.
- The success of Lage Raho Munnabhai lies in its ability to make you completely submit yourself to its charm.
- Like those good old-fashioned Hrishikesh Mukherjee films, it also reinforces the importance of human goodness and basic niceties.
- Judge it by any yardstick that you may, Lage Raho Munnabhai emerges a clear winner.

Thanks to seena and guru(supersub) for giving me company. Vijaynath unfortunately u missed out, hope everything is fine on your side. Ande please change ur gtalk status from very very busy, make time and watch LRMB.