I was awaiting for this movie for last one year (read my previous post). The wait is over this weekend. I was happy to see that this movie screened at my favorite theatre Urvashi. So 7 ppl(me, Ande, Ajay Simha, Raveesh, MB, Vijay, and Chethan) decided go for Morning show on Saturday. 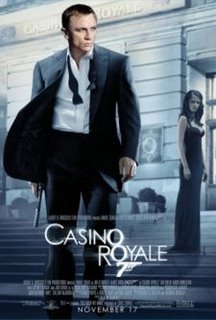 After credits there is a hair-raising chase through the city streets and seaside construction area including a harrowing fight scene atop a crane. 11 out 10 to director for this scene. This scene so fantastic that little else in the film really matches up to it. My paisa was vasooled for this scene itself.

Later part of the movie is about the card game in which 007 bankrupts Le Chiffre (banker to the world's terrorists). The casino part of the story was too long and boring. The movie could have ended with lot more action.

This movie very different from other Bond movies.

- Bond is beaten, tortured and poisened. He is not projected like a superhero.

- The gun barrel sequence is different from other bond movies. It is not there in opening of the film, but instead in end of the pre-credit sequence.

- The pre-credit sequence is in black and white (reasons I donno).

- This time the sex object is a hunk, not a babe. It is a rebalancing of the sexes. The feminist revolution is over. It is a rapturous return to Adam and Eve. [NY Times, Belfast Telegraph]

To conclude this movie is worth watching. I recommend people to avoid watching this movie at Urvashi, as the crowd is noisy and one would not be able hear dialogues properly.

CNN-IBN: Masand's Verdict: 4 stars : Having seen the film earlier this week, I can safely tell you it's the Bond film to beat most Bond films.

Rediff: Thank you, Daniel Craig : 3 and 1/2 stars : All fears are put to rest. Craig is a very solid James Bond indeed.

Herald Sun: James Bond is back in style :