Cherry blossom festival … what is it ??… I first though it would be something about cherry fruits. Then we came to know about it is about Cherry Flowers. On Friday Night Subhajit asked Keshab “have you seen cherry blossom in Korea” .. keshab replied “ yes .. the shoe polish”. I and subhajith burst into laughter. 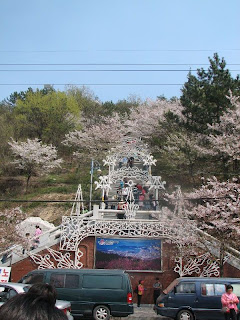 Then we searched for “Cherry Blossom Korea” in google, the majority of results were about a place called Jinhae, a coastal city near Busan. On Saturday we didn’t have much enthu to go, as we had compensate for sleep lost during weekdays. Then I came to know that last day of festival is on Sunday April 8th. Immediately we decided to go on Sunday. Subhajith also agreed after saying many ifs and buts, as we won’t be coming to Korea every time during spring season.

Our madam(owner of IGH) got information that there is no direct bus from Gumi to Jinhae. So we had take bus to a place called Masan and from there local bus # 760 to Jinhae. Following the instructions, we took 11 am bus from Gumi and reached Jinhae at 2 pm via Masan. 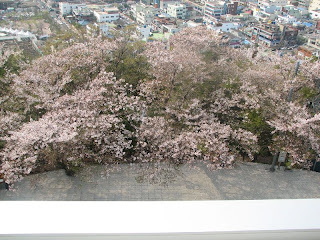 Jinhae Tower:
First we went to Jinhae Tower. This tower has a historical significance. It was erected by Japanese during their colonial rule. On the top one can witness the vegetation of the place dominated by pink color, courtesy 'Cherry Blossom'. We also saw the performance of naval band from the top. After having photo session we decided to look for a different place. 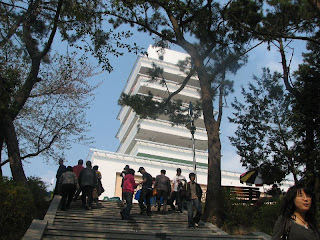 After coming down from top, we collected a Jinhae - cherry blossom festival brochure .. it was completely in Korean. In it there was photo of a railway station(we had seen its photo in internet) in the side section with some Korean characters and we did the pattern recognition of those characters in the main map. According to the map, the place was 3 km from the Jinhae tower.

On the way while crossing a Road a local person had a glance at us and asked us Bangaladesh ?? ... don't know relation he had with Bangladesh. :). may be his geography knowledge was limited to Bangladesh. 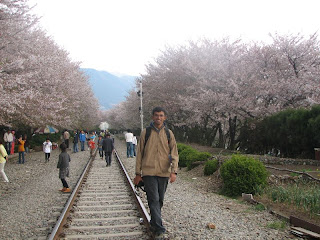 The map was bit confusing, we almost lost our way. Somehow we managed to reach the station asking passerby by doing Dumb Charades(DC). The name of station was Gyeonghwa station. It was abandoned many years back. The cherry trees on both side of the track were treat to eyes. 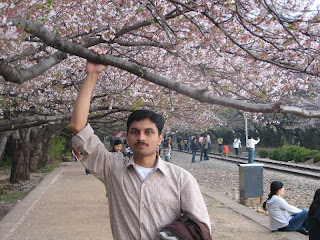 Subhajith wanted to go to a Island which he had seen on Internet. As we didn't knew its name, we used map of Jinhae to point out that place to a Taxi Driver. After reaching the place, we got know its name 'Haeyang Park'. The entry fee of the place was 1000 won per head. There was a bridge connecting mainland to island. There was a display of old warship of Korean Navy. The ship had everything in it from captain's cabin, sonar room, pantry, crew mess to barber room :) It was total paisa vasool. 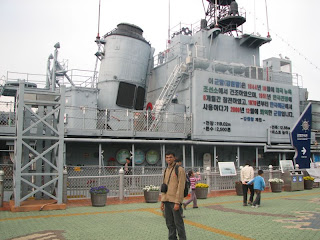 After sunset, the lit up bridge was looking too good. The time was 7 pm. It was getting too late, as we had take bus to Gumi. We decided to have a quick glance at marine museum. There are so many things in it. Model of turtle ship, fossils, corals, rubies etc. 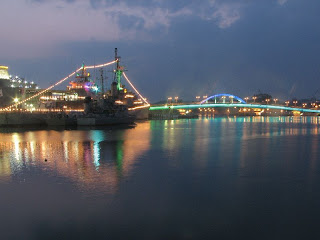 We came back to Jinhae at 8.30 and 9.00 pm to Masan. Unfortunately the last bus to Gumi was at 6.45 pm. So we had to workaround and take bus to nearest city i.e. Daegu. From Daegu, the next bus to Gumi was there at 10.30 pm. We reached Daegu at 11.30 pm and last bus to Gumi had left. Then we had take a taxi to Gumi. It cost us 35000 won. Anyway, the drive in taxi was different experience, for a few moments we were traveled at 160 kmph! At 11.15 pm we reached Gumi, and our cherry blossom trip concluded.