It is more than three week of my stay at Gumi City, Korea. I wanted to post about this city from long time. Got time to write the post, as I didn’t go anywhere this weekend. Gumi ??? many people wouldn’t have heard about this place. It is an industrial town located half way between Daegu and Gimcheon. The Nakdong River divides city into North Gumi and South Gumi. Many companies have set up industries here. Samsung have a Mobile plant here and LG has a LCD plant in collaboration with Phillips. There are many other industries. 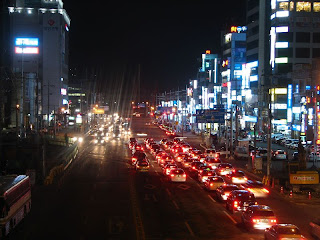 Flashy Lights
Before coming here from India, I thought this place to be dark place with no night life. But it turned out to be other way, the city flashier than I expected. Near bus terminus there is a shopping center by name “Lotte Mart”(more about it in different post). There is one multiplex ‘Megaline’, still haven’t seen a movie in it, planning to see SpiderMan-3 in it. Lets see when it will materialize. Megaline - multiplex
At every step you can find an eat out of different categories. Some are dedicated for the type of food (pork, beef, octopus). There are traditional Korean restaurants also, where one can sit on the floor and eat. 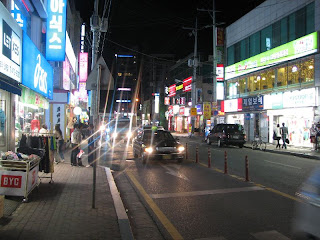 Looks like our Brigade Road
Near Megaline there are many commercial establishments. One road full of shops resemble our Brigade Road. There are shops of all International brands Nike, Adidas hear. To my surprise I found one clothing shop by name ‘Indian’ !!!. Yeah Indian is a brand here. 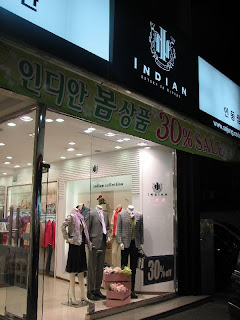 Indian - a brand !!!
So many things are in this City then whats the problem. There are some. First of all Gumi is far from major cities like Seoul and Busan. Further the city is poorly connected to neighboring cities like Daegu, as there is no bus service during nighttime. For foreigners more troubles because very less people here understand English here. If you have an international travel card then more trouble. There are only two ATMs Daegu Bank and Korean Exchange Bank in which foreign card works, both are near Lotte Mart(Gongdan Bus Terminal). 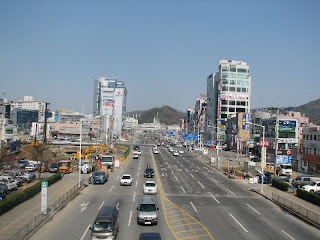 Daytime
To conclude Gumi city is not as bad described by some people in India but compared to Seoul it is nothing. Actually there should be no comparison. The silver lining is that there is a Indian Guest House(IGH) here.