Last Sunday me and Subhajit had been to Busan, second largest city in Korea. The city had hosted Asian Games in 2002 and is planning to bid for 2020 Summer Olympics. The initial plan was to leave on Saturday, we had taken sufficient information from Sea Park (whose hometown is Busan), but weather spoiled the plan, it rained for the entire day. What’s the point going to a coastal city when it is raining, so we planned for the next day as weather forecast was Sunny Sunday. In fact it turned out exactly the same. 10 out of 10 to weather station people.

We took Munghawa train at 6.54 am from Gumi station. The train was essentially a passenger train and stopped at each and every station. It reached Busan station at 9.30 am. Right outside station there is City Tour Bus stop. There are two routes for city one Beach route and other one Downtown route. There are scheduled stops in both direction and at each stop bus comes at every 1 hour. The price of ticket was 10000 Won (valid for entire day). We took Haeundae direction( beach direction) bus which departed at 10 am. 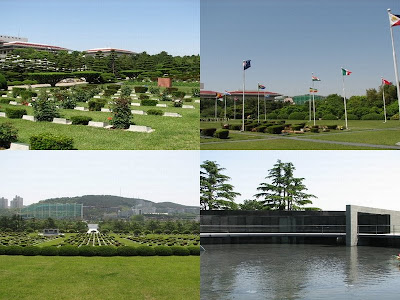 At 10.20 am Bus stopped at UN Memorial Park. We were the only two persons to get down from bus. The next bus was at 11.20 am. So we had to spend one hour at the park. The park was nicely maintained, but it is not worth to spend one hour. There memorial for soldiers from different countries who participated in 1950-53 Korean War. I was surprised to see Indian flag in the park. Later I came to know the India participated in the war being part of medical team. 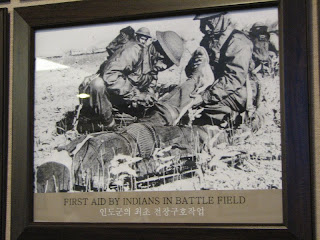 We boarded 11.20 am bus from UN Park and got down at Haeundae Beach. We tried to keep our feet in water but it was damn cold, so we backtracked and decided to walk on the sand. On the beach there were many kinds of people. Some people were taking sun bath, some high school kids playing with tech toyz. There was even Buddhist prayer session going on the beach. 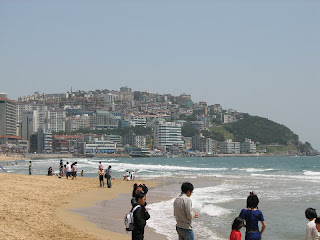 There is famous Busan Aquarium in Haeundae beach. We skipped it, as we had already been to an aquarium in 63 square, Seoul. FYI, the ticket price was 15000 won.

From Haeundae beach one can take ferry which takes to round trip of Oryuk-do Islets, a group of inihabitant islands. As explained by Sea Park Oryuk-do means 5-6. On cloudy day only 5 islands are visible and on a clear day 6 islands are visible. The boat trip was around 1-hour. 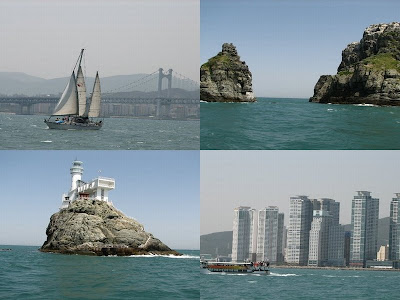 After finishing boat trip we relaxed sitting on the beach by seeing beach volleyball game played some Americans. They seemed like army men with their body build up.

After sometime we planned to Gwangalli Beach. We planned to take 3.50 pm bus from Haeundae to Busan and then from Busan station to Gwangalli. The bus came to stop 30 minutes late and adding to our misfortune all seats were filled up. We were traveled standing till Busan station. From there were took 5 pm bus and reached Gwangalli at 5.30 pm. 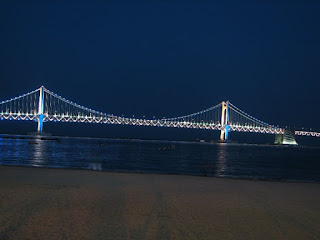 Gwagan Grand Bridge
The main attraction of this beach is Gwagan Grand Bridge. There are many other stuffs also. In tour2korea website it is mentioned that Gwangalli Beach is a popular gathering place for young people in their 20s and 30s. There are many coffee shops on the road besides the beach. People who love seafood wont be disappointed, as there is a fish market at one side of beach, where one can have raw fish.

We waited until it turned dark, as I had a plan of capturing illuminated bridge in my camera. Before leaving the place we met Mr. Gwan An, scientist at a nuclear power plant. He was taking snaps of the bridge in his Nikon D70. We had a brief chat with him, as his conversational English was good.

Later we took Subway to Busan Station. For Gumi there was a Munghawa train at 9.35 pm but there were no seats available in it, so we had to book tickets for 10.25 pm Samuael train. So we had 40 minutes to do time pass. I had a look at Busan map to check what's their around the station. A place by name Shanghai Street caught my attention. 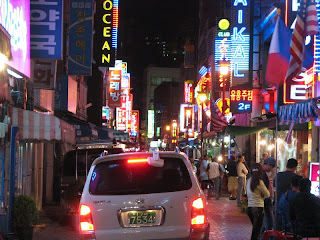 Shanghai Street
I expected it to be a general shopping street but it turned out to be something else, can’t be described in words here. If you are intelligent enough you can make out by the photograph!

Finally we came back to Busan station, boarded the train and we were back in Gumi by 12:30 am.