This was on cards for many days. Had planned it for many times. It got canceled because overcast weather conditions or lack of enthu. Finally it materialized on 20th May with 5 people on board Subhajit, Santoshi, Harsha, Madhu and me. 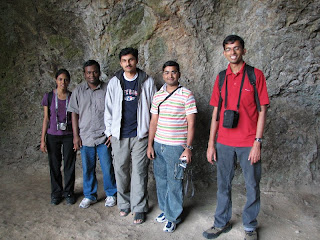 Geumo-San Korea’s 490th National Treasure(490 …not a big deal), but for the people staying at Gumi it is a perfect weekend getaway, for which they really don’t have to getaway. There are many things to see such as a waterfall, lake for boating, natural cave, Buddha temple, stoned carved statue etc, there is hiking trail as well. 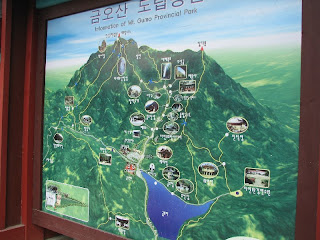 We left the guest house around 1.30 pm, after getting delayed because of unavoidable circumstances and reached foot of Geumo San parking at 2 pm. The Taxi cost us 11200 won. Next to parking lot there is a lake for boating, we decided to keep it at last. The entry fee to the park is 600 won.

The initial ascent can be done either by foot or cable car. Since we were already late we decided to take cable car. The cost of one way trip was 3500 won per head. One can go till Hae Woon Sa Temple by cable car, beyond that point one has to ascend by hiking. 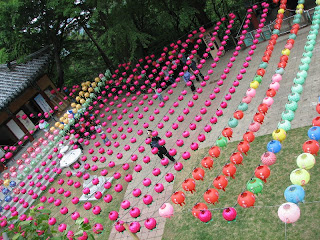 According to board put up in front of temple, it was built at the end of Silla Dynasty(9th century). The temple was decorated with Laterns for Buddha’s birthday which will be on May 24th. 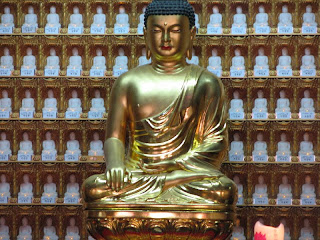 Inside the temple there was a 3 feet high gold plated Buddha idol. We sat for a while in front of it for a while, there a Korean lady came and lit a incense stick, we also followed the same. 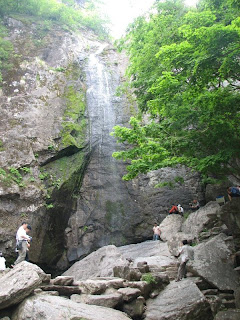 Next was Daehye Waterfall, the falls was not so graceful, it was there for namesake. People who have seen virgin waterfalls in 'uttara kannada' will not find it exciting. 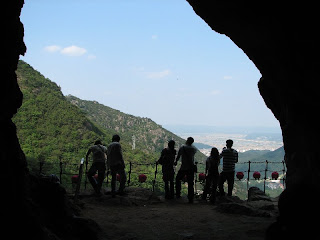 This place somewhat hatke place, the trail to reach this place was amazing. Thanks to the fencing put by the authorities, otherwise it would have been impossible to reach the place. In Toson Cave a Zen priest Toseon had attained enlightenment. The view of Gumi City from the cave was a treat to the eyes. 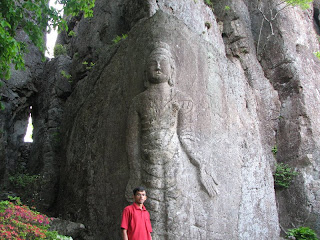 It was 2.1 km from waterfall. One has to take hiking trail to reach to the place. Our ascent was at very slow since it was Madhu maiden trek, we had take sufficient breaks. Finally we made to the place at 6.15 pm. After having photo and video session we started the descent.

6.35 pm sufficient light was still there, as it gets dark very late in summers in this part of the world. Before starting the descent timings of cable car came to my mind, that it stops operating at 7.30 pm. Therefore we decided to switch gears and increase our descent speed. Santoshi had a tough time while descending, her shoes were giving up many times. She climbed down almost sitting down at many places. At 7.45 pm we reached cable car dock, so we had continue descent using hiking trail till the foot of Geumo san. It was almost dark and fortunately I was carrying a torch. The night descent was not bad as we expected, by 8.15 pm we reached the foot of Geumo San. There were no taxis available. Therefore we had to call up Keshab and ask madam to send taxi to Geumo San using 'call taxi' facility.

It was the end of memorable trip, we could have covered other places(summit, boating in lake) in case we had left early in the morning.

Have a look at my picasa album for more photos.