People on board: Subhajit, Harsha, santoshi and me.

Purpose: To see places which were missed in previous trips and to guide Santoshi and Harsha how to explore Seoul.

We took 7.50 am Samaeul train from Gumi Station, as my previous Seoul Trip we took KTX transfer. For me the journey was not so exciting as my maiden KTX journey last month. At 10.30 am we reached Seoul. This time unlike previous KTX journey there were two stops between Daejeon and Seoul, so it took more time to reach Seoul. 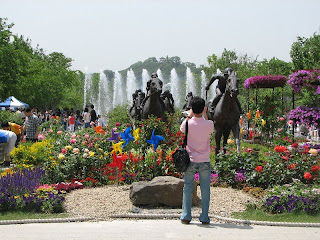 First we decided to go Seoul Forest, this place was recommended by Hussu. We took subway from Seoul Station to Tukseom station. From there entrace of park is 600m+. Frankly speaking the park was not so exciting, our lalbagh is much better than this. The only pro is that we can rent bicycle on per hour basis. Me and subhajit decided to hire doubles cycle as we haven’t ride such a kind of cycle before. Later when riding doubles with Santoshi the cycle chain came off. It took 10 minutes to fix it, in the process we lost our enthusiasm. After spending half an hour more we decided to move to another place.

This place is known as America in seoul. We just went to explore the place and for window shopping. We went into Hamilton Shopping Centre and ended by buying T-shirt purse etc. Later we had lunch at New Delhi Restaurant, by getting information from from Tourist Information center. There we opted for buffet lunch for 13000 won. Frankly speaking the food was not so good. I feel the dishes which were kept for buffet might have been prepared 2 days back. I hope the food have been better if we had opted individual items. 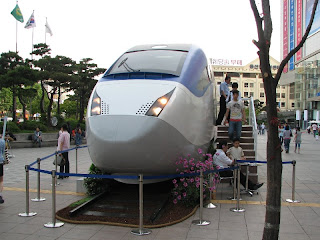 KTX-II model at Yongsan
Itaewon to Yongsan by subway needs 2 tranfer, so we took a Deluxe Taxi. When we got down in front of Yongsan station, we saw a model of KTX. Initially we thought whats the big deal, we have already traveled by KTX in morning. But the next moment we came to know that it is model of KTX-II, which is going to be operational in 2010. The coaches have been freshly designed, the interiors have been improved compared to present. Passenger comfort has been given importance. All these were explained one representative standing next to the model. When he realized that we are Indians, he also mentioned KTX is designed by Rotem Company(Hyundai Motor Group), the same company has designed coaches of 'Delhi Metro'.

After having photo session outside station, we entered into electronics market. Subhajit was very much desperate to reach this place as he had buy Nikon D80 after doing R&D for 1 month.

I was very much interested to take ride of this. We terminated our shopping at 8.45 pm, hurried to Yeouinaru Station after gathering information from tourist information center at Yongsan. We used to subway to reach Yeouinaru Station. There two kinds of trips round trip Yeoudio-Yeouido and one way trip Yeouido-Jamsil. The last round trip ferry scheduled at 9.30 pm had already left. The last and the only remaining trip was one way trip to Jamsil at 9.40 pm. The cost of tickets was 9900 won. The journey was amazing, going under bridges of Han River was a different experience. Enroute to Jamsil, the ferry went under more than 10 bridges. Each bridge had a different structure and was lit up in a different way.

The ferry reached Jamsil at 10.45 pm. We made dynamic decision, if we find accomdation (of decent cost) in this area, we will stay here itself, instead of going to downtown Seoul for accomdation hunting. We walked till nearest metro station Simcheon, there we found a motel buiding few blocks away. In the process of reaching the motel we entered into a street which was full of motels. There we checked into Xian Hotel. The rooms of hotel were made for couples. The door of bathroom was transparent, reminded us of bathroom sequences showed in many movies. 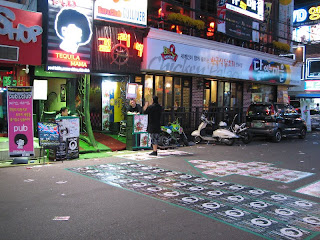 Tequila Mama
After freshing up at in an hour, we(me and subhajit) went out for a walk to witness night life at Jamsil which we had partially experienced enroute to hotel. There were nights clubs at every footstep. The At night 1.30 am there were so many people on the street. Subhajit said "this kind of enviroment can be witnessed in Bangalore only on new year eve". Of all the night clubs a club by name 'Tequila Mama’ had a nice attention getter.

Sooner we realized that 'Tu Hi Meri Shab' song of Gangster was shot in one of the clubs of Jamsil. 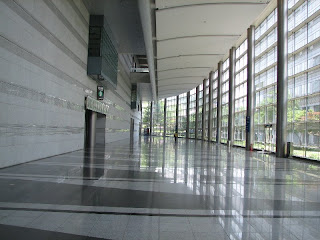 Next day we took subway from Simcheon to Samseong station for exploring Coex Mall .. biggest shopping mall in Asia. The area around Coex Mall is the poshest area in Seoul. There is a world trade center building adjacent to the mall. 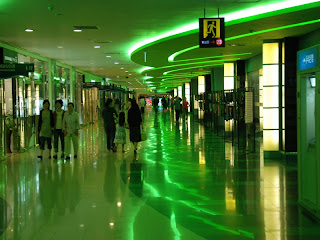 We just roamed in the mall clicking photographs.

Yongsan again
Previous day we had terminated our shopping in Yongsan as we were getting late for Han River Cruise(Ferry). We continued shopping for the stuffs which we have not bought on previous day. Later Hussu joined us at Yongsan Station. 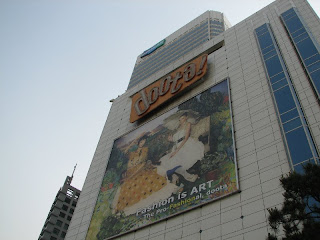 Along with Hussu, we decided to explore Dongdaemun. First we went inside Doota Tower, I had seen this building while waking in Cheongyecheon path in my previous trip. It was an amazing place. 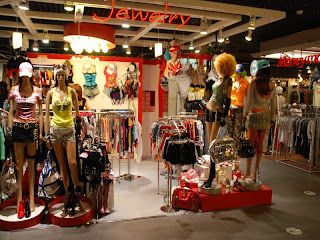 The first two floors ladies clothes. Third floor was for men’s clothing. There are so many varities of clothes all were fresh and latest design. In fact price tag were also like that. We wanted to take photograph but many shopkeepers requested us not to take photos.

We came back to Seoul station at 7.30 pm and booked tickets for 8.15 pm Samaeul train to Gumi. The train reached Gumi on time at 11.12 pm. Later we had stand in a queue for Taxi outside Gumi sation for more than 20 minutes. It was longest wait we had experienced so far.

To conclude, probably this might be my last trip to Seoul as my current onsite assignment is going to end in two weeks. So Annyongi Kyeseyo Seoul !!!!!!

More snaps are shared in my picasa album.