The Bourne Ultimatum: Worth the Wait.

I was not a follower/fan of Bourne Series. But the things changed, when I heard about the movie The Bourne Ultimatum, when I was in Korea. o be updated with the plot before release of Bourne Ultimatum, I downloaded Bourne Identity using torrents, thanks to high speed internet in Korea. When I came back to India, I managed to get DvdRip of the second movie Bourne Supremacy from a friend. 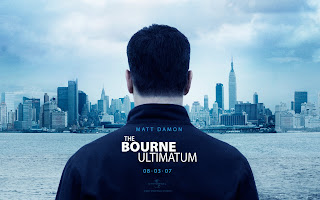 image courtesy: thebourneultimatum.com
The movie released worldwide in August. I don't know why the release in India was delayed by month and a half. There was hardly any promotion about the movie in India, except a few articles here and there. One of article I read was an Editorial opinion in Economic Times Bourne vs Bond, in which Jason Bourne opinion '007 is outdated' was mentioned. When the movie released, I was out of station. I only got to know about the release while browsing through Masand's verdict in ibnlive.com.

I couldn't see the movie next weekend after India release because of Kotebetta Trek and subsequent two weekends the movie was screened only at 10 pm show in PVR. Meanwhile DvdRip of the movie was also available, but I avoided to see it as I was very much particular about seeing the movie in theater, the wait continued.

Last Thursday when I saw Bourne Ultimatum 12 pm show in pvrcinemas.com, I immediately called up Ajay Simha and booked the tickets online. The same night while chatting with my Korean orkut friend Daesok Kim (an MBA student studying in Bangalore), insisted on meeting in the weekend. I told him that I am going to Bourne Ultimatum on Saturday, asked him whether he is interested to join us for movie outing. He immediately searched about the movie in naver.com and saw the rating as 9.3, which very good rating as per Naver standards. He confirmed within minutes and I booked another ticket for Daeson right next to our seats.

On Saturday myself and Ajay reached Forum at 11.30 am. Daeson had come there an hour before. We went pick up booked tickets at the counter. The ticketing machine is just amazing. We will get the printed tickets just by swiping our credit card, which was used to book tickets. Truly, technology has come a long way, now no need to wait in a Q book tickets. Before the start of movie we chatted with Daeson. Ajay was amazed by Daeson's knowledge of India and was surprised to heat that he has toured almost major tourist destinations in India.

The movie turned out to be an edge of seat thriller, there is hardly a dull moment. I liked the movie more than the predecessors, may be because I haven't seen them in theatres. All the sequences looks believable, there is no explosion or Matrix style stunts. Jason Bourne is not projected as a superhuman, as normally done in Bond movies(except Casino Royale). In most of the scenes there is jerkiness, seems scenes have been shot using handheld cameras. I am not sure whether this was done to make the scenes realistic, but it was irritating in later part of the movie.

To conclude, I managed see the movie after waiting for so long. It was worth the wait and money(ticket price).

An aside:
Daeson was surprised, when there was an forced interval in the movie, which won't be there in Korea. He is right for a thriller movie of shorter duration breaks can be avoided. But no interval means no business to pop corn and pepsi vendors of PVR, so it's unavoidable for the time being.