Today is Blog Action Day, bloggers around the web will be posting about a single important issue on everyone’s mind - the environment.

The timing of the event has been perfect, it's recently announced that Nobel Peace Prize 2006 is awarded to Intergovernmental Panel on Climate Change(IPCC) and Al Gore. According to wikipedia the award is 'for their efforts to build up and disseminate greater knowledge about man-made climate change, and to lay the foundations for the measures that are needed to counteract such change'.

There are 'n+1' issues w.r.t environment. It won't be possible by an individual to discuss about all the issues. So Blog Action Day is the right initiative.

The issues I want to discuss is the attitude of the people, to be precise individuality of a person. Many people are not bothered to adopt to friendly practices, thinking that one person's practice won't make a big change. Well, millions think the same, resulting in serious threat to the environment.

Let's take the example of electric car. In India, Reva Electric Car was launched in 2001. How many did seriously thought of opting for this eco friendly car ?

Not only this, How many have taken initiative to stop usage of plastic/polythene bags ? To be frank not many of us. There a few exceptions. Last year I had travelled to BR Hills (one of the top ten biodiversity hot spots in the world). There is a temple atop the hill. I observed that the usage of plastic bags is banned in the entire region. All the shopkeepers there handover the items in a cloth bag only. 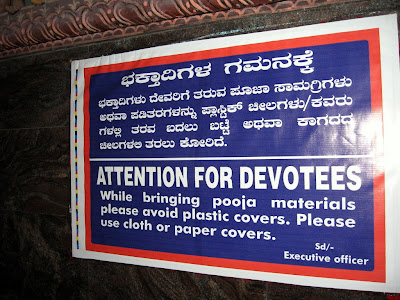 At Kumaraswamy Temple, Bangalore
Temples in Bangalore are not far behind. In all the major temples of Bangalore temple management have put a notification requesting devotees to avoid plastic covers for pooja materials. I feel, this has to be replicated in others places also.

Recently Trekking/Hiking has become one of the option for weekend getaway. But it is costing our environment very much. At regular trekking routes one can witness dumps of plastic wastes. I have faced embarrassments many time. Some of friends carelessly drop plastic waste in spite of giving lectures several times. Nowadays, if my friends commit the same mistake, I pick up the waste and carry it myself, without giving lectures, a good Gandhigiri technique.

To conclude, in order to protect our environment one doesn't need to put effort which is as good as obtaining a Nobel Prize. It can be done by taking simple initiatives and putting what all the knowledge we obtained during schooldays into ACTION.
at Monday, October 15, 2007