The fourth edition of Bangalore Landmark Open Quiz took place on Nov 1st at Chowdaiah Memorial Hall. I didn't really bothered to attend last three editions. After reading about this quiz in many blogs, I decided to participate this year with Ski and Shreesh as teammates. 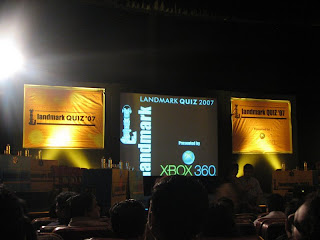 The quiz was hosted by India's renowned quiz-master Derek O'Brien. First there was preliminary round of 40 questions, followed by final round between 8 teams. The questions in prelims were easy generally with many sitters and a few bouncers. The question were from wide range of topics from History, Entertainment to Astrology.

We made many silly mistakes in the prelims. Initially we thought that we might miss cut off by a few points because of the mistakes. Later seeing the teams in the hall(many Pantas wearing IIMB T-shirt, jackets), we realized that we have very slim chances of qualifying and have to become audience in the final round. Since it was a open quiz there were many teams with members of different age group. These kind of team have more chances of qualifying as their range of knowledge will be vast. One of such team was 'WWW' with Mother, Son & Niece as members.

As expected we were way below cut off 28. Highest score was 32 by QED (last year's champions). Incidentally five out of eight finalist had scored 28. 'WWW' also qualified with 28 points.

Final round had many tough questions and needed lot of work out for answering. There neck to neck fight between QED and WWW. In the end QED emerged winners by answering handsomely final 3 rounds. The Cinderella slippers - squirrel feather was a superb answer under pressure. 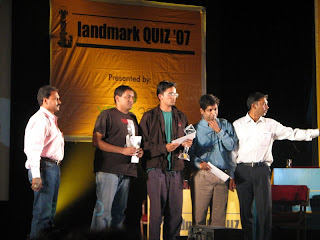 Winners- QED
The Quizzer of the Year award went to captain of 'WWW', Sushila Kamath. I guess she might be a school teacher. One has to appreciate her enthusiasm. The confidence in which she answered the reason for increase in pencil sales was simply amazing. 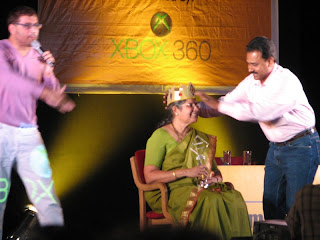 Quizzer of the year
To conclude, this was my first experience of a open quiz, looking forward to attend more such quizzes in future. It's was a free entertainment and Derek O'Brien brought the house down with his spontaneity and one liners. On the stage, he tried to pull legs of team 'Thigh in the air' also nicknamed 'Crows' on the spot. Ultimately, the same team made a stunning comeback to finish 3rdended and also won the prize of most popular team.

Ski was not very enthusiastic to attend this quiz as he had better business to do in Mysore, but today morning he messaged me "Man thanks for talking me to the quiz. It was really worth it :)"

Please find the questions of the quiz below. Some questions I have just mentioned keywords, not phrased because I don't know the complete question. Please let me know in case you know the same.
QUESTIONS

Round-1
1. Before stamps how were postage rate determined ? CANDLING METHOD - If the candle light passes through the envelop it costs less otherwise more
2. Film with 9 scientific errors ....
3. Describe "Muffin Top" ? Protuding Roll of Fat when one wears low jeans.
4. Rome Gladiator how did they ordered death ? Thumbs Up
5. Which cricket played only 2 matches in 1983 Cricket world cup and both of them(only) India lost -> Dilip Vengsarkar.
6. Acoording 2005-06 census which country has maximum number of Tigers - USA
7. Oswald Maleno - short 12 minute film - screened Dec 1986 -> Rabindranath Tagore
8. What are Arasuram, Gandharva, .... -> 8 types of Marriages

Round-3
1. Purpose of Trackgandhi dot com ? To tracks Indian Currency Notes.
2. Jarasana v/s Krishna ? why ? - Kamsa's wives approached Jarasandha
3. Only film raj kapoor and dilip kumar acted together ? Andaaz
4. Thomas Alva Edison, Louis Armstrong, Lyla Ritchie ? Hello
5. What do you mean by Medial Capitals ?
6. Which is the most Commenest bird in the world ? Chicken
7. what's common between La paz, Bolivia. ---, Nepal, Salado Chile Ragon, Angel falls (venenzuala) -> All are highest in respective categories.
8. Brown Bear hiebernates for 6 months in natural conditions, but in captivity does not hiebernate ? -> Because of scarcity of food during winter/

Visual Round
1. What does Maiya Maiya mean in Arabic (song from GURU, Malika Sherawat)-> water
2. Visual -> Dancers doing some weird dance : Choreographing Penguin dance sequence in happy feet.
3. Flags; Army Silk, Navy Woolen,
4. 2 words, 10th anniversary, one is blamestorming . which is the other one ? muggle
5. Video Clip from film Zanzeer picturised on some actors(not the leads). Who is the actor ? Gulshan Bawra.
6. which famous fictional accessory was made out of squirrel fur ? Cinderella's slippers

Last Round-2teams
1. which book has 5894 hymns, always placed on cushion ... -> Guru Granth Sahib
2. Who was musician at India's first Independence Day ceremony at Lal Quila -. Ustab Bismillah Khan
3. Indian 2 rupee coin is of shape hendecagon - how many sides does it have? 11 sides
4. In which country couples are wished by prime minister for 50th anniversary and by Queen for 60th anniversary -> Australia.