Today morning, I had been to Lalbagh for jogging, after that just went to see what's happening at Urvashi. My eyes were lit up, when I saw that there is paid preview of Om Shanti Om(OSO) at 6 pm & 9.45 pm. Even though, Ajay Simha had booked in advance for saturday matinee, I couldn't resist myself seeing buying ticket for the paid preview. Seeing movie without reading any review is a different experience, that too before official 'First Day First Show'. 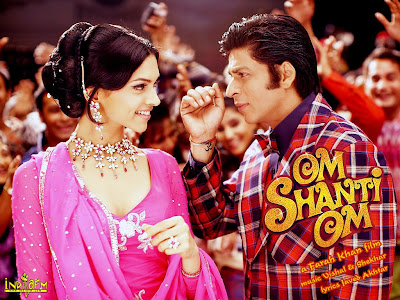 image courtesy - indiafm
The movie is one of the most awaited of 2007, there was a nice build up, courtesy marketing of SRK & team. A few months back when I came to know that the movie is about reincarnation I though of giving first preference to Saawariya. But the marketing of OSO changed my opinion gradually.

Actually, there is no USP in the movie, that's because there are so many ‘selling points’, nothing stands out as 'unique'

In addition other than many plusses in the movie


Many stuffs are derived from several Bollywood movies
- SRK saving Deepika while shooting a 'fire sequence', similar to Sunil Dutt saving Nargis in Mother India.
- The revenge+reincarnation plot of Karz ( also Karan-Arjun).
- Kiron Kher in second half reminded me of Rakhee in Karan Arjun.

But missed out some stereotypes:
- मैं तुम्हारे बच्चे की माँ बनने वाली हू, one of the most famous,common one liner was missing. But the english translation of this 'I mean, I am pregnant' was there.
- Shiv Ji: How can one forget 'shiv ji' of film city who had divine presence in many movies.

The sequences which can be termed as highlights
- Entry of Shanti-Priya[Deepika].
- Om Prakash(a junior artist) enacting as Om Swaminathan (a South-Indian superstar). The pseudo shooting of Tamil movie is very hilarious, especially delivery of lines 'Yenna Rascala'.
- Filmfare awards sequence. The announcement of nominations for best actor is the most funniest part.
- Lunch between Om Kapoor[SRK] and Mukesh Mehra.
- Auditions in second half for a female actor.

Performance wise everyone has done well, but the major surprise factor is Arjun Rampal. He was enacted role of Mukesh Mehra, a cunning producer convincingly.

So many positives, no negatives ?. To be frank there are not many negatives but major thing (in simple words) the movie is 'it's old wine is new bottle'. But who cares, the movie it is an out and out entertainer, in others words पैसा वसूल. All credit goes to packaging skills of Farah Khan.


PS: I have deliberately kept this post short. Since the movie is yet to release officially, I don’t want reveal the plot details. Will be updating the details gradually.