The 3 mistakes of my life 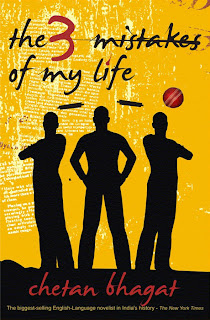 The biggest-selling English-language novelist in India's history Chetan Bhagat has recently released in third novel 'The three mistakes of my life'. The book was marketed in a effective way. One can read the excerpt of the prologue in author's website and to read the prologue further one has to e-mail the link to three of his/her friends. A nice and effective way to build curiosity, I am sure those who have read the link would have definitely bought a copy of the book immediately.

The story is about a guy by name Govind Patel, his three mistakes and his two friend Ishaan and Omi. Set in Ahmedabad in the period 2000-2002 the story blends together business, cricket, politics, religion and romance in a seamless manner. The plot includes major incidences of that period like Bhuj earthquake, India-Australia historic test series, 9/11 attacks, Godhra riots and also influence of these incidences on the protagonist's life.

Being a very good business acumen Govind earns for his living by doing Maths tuition and later by opening a sports shop with his friends. His personal life changes when starts giving tuitions to his friend's sister Vidya. Starting off with Maths he gradually moves on to Physics to Chemistry and then to Biology(read practicals).

Like his previous book in a true Chetan Bhagat style, the author explains the emotional moments in a simple yet effective manner. Look at they way he explains the dilemma of the protagonist while talking over a phone to his student-cum-friend.

A 'very good friend' is a dangerous category with Indian girls. From here you can make either make fast progress. Or, if you play it wrong, you go down to the lowest category invented by Indian women ever - rakhi brother.

The book recommended an easy read to people who have read and cherished Chetan's previous books i.e. people who don't care about 'Literary Quotient' and believe in KISS principle.

One blooper:
Harbhajan Singh had taken hat-trick in first innings on Day-1 of historic Kolkota test match, but in the book it is mentioned that the hat-trick was on Day-5 post tea session in 2nd innings of Australia.

What other's say abt the book:
Rashmi Bansal: The 3 mistakes of my life: review.
CNN-IBN: Picking up Three Mistakes... is a big mistake.

About Chetan Bhagat in ...
Newyork Times: An Investment Banker Finds Fame Off the Books
BBC: From banker to best-selling writer
at Sunday, May 18, 2008