When the movie is one of the most awaited I make sure that I see it in theater's as early as possible. But sometimes this takes a long time to materialize. The same happened to me w.r.t to seeing the movie Accident. The movie released in Ugadi weekend, but because some issue at the workplace I had to work on the same weekend. And the next Friday I had to fly to Paris for a business trip on a short notice. I cannot make time for the movie even after hearing/reading several rave reviews. I came back to Bangalore after 28 days and two days after landing I attended photography workshop by Kalyan Varma. 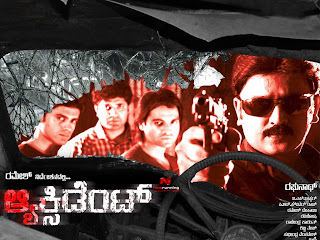 So the subsequent weekend at last I planned to see the movie with Raveesh. Since the movie had released one month back, it was out of majority of single screen theatres. The options left for us was either Triveni or PVR. We dropped the idea of going to Triveni being conscious of the fact that we may have to stand for tickets under hot sun or end up buying tickets in 'black'. In PVR there was one show(1.40 pm) and we finalized to go on Saturday(17th May).

Booking tickets became a other big tedious process. On thursday I tried to book tickets online 6-7 times !! After credit card authorization the window used to go into infinite waiting state. The behaviour was same with both IE and mozilla. After making 2-3 attempts on Friday, I decided to buy the tickets at the PVR counter itself. So I got at Forum on the way back to my home. Fortunately even after so much delay I got 4 tickets(for me, Raveesh, Devi Prasad, Pavan) at a descent distance from the screen.

The story is about a radio-jockey Sawant[Ramesh Arvind]. After coming back from foreign trip Sawant finds out that his wife is killed in an Accident. Rubbing salt to the wound is the fact that there was a guy with his wife in the car when the accident happened. There are all kinds of speculation in the media about an extra-marital affair of his wife.

Dejected Sawant takes break from his work and tries to find out the real reason behind his wife's Accident. In the process he finds out many shocking revelations keeping audience at edge of the seat. Sawant is assited by his friends and colleagues. One among them is Pooja Gandhi of Mungaaru Male fame.

Since the movie is about a Radio-jockey definitely there will be a tie-up with a Radio Station and in this movie it is with Radio Mirchi. In fact one of the famous RJ - Rachana has made a special appearance in the movie.

Overall a good movie to watch and in fact from Sandalwood's perspective it definitely breaks new grounds!

PS: Seeing the movie with Sandalwood Encyclopedia - Raveesh was different experience altogether. Well, I go to know that Pooja(Sanjana) Gandhi's voice has been dubbed in all the movies so far!. Have a look Raveesh's point of view Accident - Film Review.

PPS: It was nice to see the movie shot in many known locations in Bangalore and it was even more amusing to discuss among ourselves "which location is that?". The 'Lovely Resort' shown in the movie is actually 'Shakthi Resort' in RajarajeshwariNagar. The office of Radio-Mirchi shown in the movie is the actual office. I made out when they showed the outside view from the office window. It was the view of Bannerghatta Road in front of Sagar Automobiles.
at Sunday, May 18, 2008