IPL Experience in a stadium

Being out of India for a month, I missed the first phase of cricketing extravaganza - Indian Premier League (IPL) and more importantly I missed opening ceremony at Chinnaswamy Stadium Bangalore. Since I was sure to be back in India by May 15th I had booked two tickets(myself and Raveesh) for the match between Bangalore Royal Challengers and Delhi Daredevils. Also, there was a discussion among 'Ctrl-Esc group' for some get together, ultimately we decided to see a IPL match. Coincidentally Rohith(organizer) booked the tickets for the same match I was planning go with Raveesh. So I had to give away my ticket to Raveesh's friend Devi Prasad. 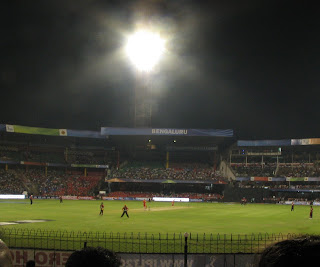 On May 19th the match was scheduled to start at 8 pm. As there was some entertainment programme before the match, I reached the Gate-12 of McDowell-Best-View Stand at 6 pm. But I had to wait for Rohith, he was on the way and was caught in a traffic jam near Domlur. The one hour wait was one of the most frustrating one and I had to hear Shaan's concert being outside the gate :( I cribbed myself several times for giving away tickets and trusting Rohith's punctuality. The only silver lining during the wait was getting glimpse of the cheer-girls group entering the stadium premises in a luxury tempo traveller. One among them was enthusiastically shooting the crowd outside the gate in her handy-cam.

Rohith finally came at 7.15 ending our long frustrating wait. As soon we entered the stands, toss for the match took place. Delhi's captain Sehwag won the toss and elected to field.

Before start of the play there was a brief performance by the Redskin cheerleaders. The group was introduced as first ladies of American football and personally hired by Vijay Mallaya. They performed facing the pavilion and at a sufficient distance from us. I managed to capture a shaky video(embedded) of the same. But seeing it live through binoculars was a different experience altogether.

Then after Redskins performance, the cheer-ambassadors of Royal Challengers Ramya and Upendra came and waved the crowd encircling the ground. Upendra in his usual style cracked a one-liner in Kannada

Unfortunately Upendra's comments didn't had much impact on Bangalore's batsmen. The Royal Challengers batting was as usual very boring to watch. But thanks to debutant chap Shreevats Goswami there were couples four and a six and cheerleaders danced for the each boundary to tunes of English, Hindi and even Kannada songs. For most part of the match the crowd seemed to be not interested in cricket and were concentrating more on cynosure of the stadium ... cheerleaders. After moderate start and some late stroke-play(3 sixes in last over) by Misbah-ul-Haq, RCB managed to set a decent target of 155.

In the innings break cheerleaders performed again, this time it was on the stage next to the score board.

While chasing Delhi got off to a flier. The first wicket fell at score of 90. Till that time cheerleaders had a nice rest. For crowd it was a boring phase for obvious reasons. Later, there were some hiccups for Delhi, 2-3 wickets fell in quick succession and cheer-girls and in turn the crowd had something to cheer about. Even after losing a few wickets Delhi cruised to victory and in fact scored the winning runs with a six.

Among the crowd there was decent support for Delhi team, obviously because there is large percentage of migrant population in Bangalore. One of the group claiming themselves part of 'Delhi Daredevils Parivar' had got a nicely prepared banner. Have look at it in the snap below. 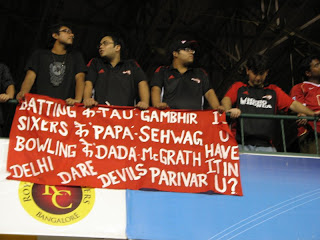 Delhi Daredevils Parivar
Overall watching match was an amusing experience, even though I missed initial part of entertainment show. The core part of entertainment section was performance by Redskin cheerleaders. 10-out-of-10 to them for keeping the crowd entertained in spite of somewhat boring contest. Cricket had really taken a backseat !

Now one curious question .. how Washington Redskins have managed to catch the nation's imagination ? Is it only because of their skimpy outfits or white skin ? In my opinion more than skimpy outfit there performances was nicely choreographed to the music. The energetic yet simple, synced-to-music dance provides the perfect entertainment for the crowd.