Finally I am back to Bangalore from Paris after 28 days biz trip. More than work the trip was more dominated by Visa extension and other non technical issues. The major plus point of the trip was that I stayed in Paris during core spring season. This is second consecutive year(last year it was Korea) I have stayed in spring season in a temperate region. Pinks flowers, Tulips and Strawberries ... a bliss indeed ! 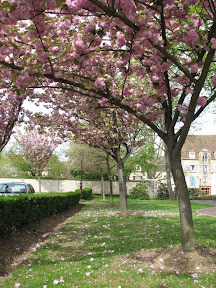 Hussu Mia - the saviour:
He was both technical and non-technical relief for me. Non-technical because he got more than 20 kgs of food items from India which was sufficient to cooking for me have Indian food.

Regarding Work:
I can write thousands of word about this and effects I had because of non technical issues. But as per blogging ethics we should not write about one's company, work and customers. So I don't want to discuss about it further.

Regarding Accommodation:
Because of non availability of rooms, the hotel stay was big adventure this time. First 3 days I stayed in Hyatt, next 2 days in SuiteMDB, then again back to Hyatt for 5 days and remaining days in SuiteMDB. Hyatt Regency is a good posh hotel with flashy building. All that this is fine but apart from high frill facilities, good breakfast and there was nothing worth to mention about the stay. The hotel is next to A1 expressway, so there are no parks and shops nearby. In contrast the stay in SuiteMDB was quite pleasant. The most important thing was that there was attached Kitchen facility, also there was some kind of park nearby and a grocery store which used to be open on Sunday too till 12 noon !

Places I saw this time.
As the work was very hectic, officially we used to work on Monday-Fridays between 9 am to 9 pm and on Saturdays 10 am to 6 pm. After coming back to hotel also we used to work and we were expected to do night-outs too(which I hate the most). We used to get some free time on Sunday, but all the commercial places used be closed, so I had hardly had any purpose to go out. Since we were staying near Airport, the train ticket to downtown cost 8.2 Euros one-way ! it has sufficient enough to dampen the enthusiasm. However the day before leaving i.e. March 8th was a public holiday on account of World-War-2 victory day. We used the holiday to the fullest and explored many commercial places and monuments in Paris. More about this in separate post.

People who became friend
The hero my Visa extension story Kuk-Han became a good friend to me. Got to appreciate her efforts and the way she got me off the boarding gate on the 'dramatic Tuesday'(April-22). While interacting with her, I got to that she is person without a 'Pause button'. She used to talk on and on, also on while driving to the prefecture many a times she used to miss a turn as she used to be busy explaining something.

Side effects of Visa extension

Since my Visa was initially valid till April 22nd and I had planned to do many things after coming back to Bangalore. With the last-minute visa extension I had to cancel many programmes.

Sarpass Trek: This trek conducted by YHAI I was supposed to go with Jatin and his friend. The reporting day was on May 4th. I had kept the booking open till last week of April. Finally I canceled my booking on 27th April. But I didn't get any refund since by the time I canceled the time was past 12 midnight IST.

Indian Premier League: A billion dollar cricket extravaganza. I followed each and every news item during the build up for the league and also blogged about the same with Aditya and Raveesh at unofficialipl.com. Just a few days before the league my travel got confirmed and I missed out glitzy opening ceremony at Bangalore and missed matches of first-phase. Now I am back to witness second phase of the league and planning to see a match of Royally Challenged team of Bangalore.

Mandolin Srinivas Concert: It takes place at Fort High School Grounds every year in April-May. After missing the concert for last 2 years, this time I had promised to my friend Ajaysimha that I will be coming. But unfortunately I missed the concert this year too.

What I almost missed ?

Karnataka Elections Voting: Usually I follow elections like anything and hardly I miss out any news items related to election. This is more obvious because the DBMS project in my college was related to Indian Elections. This time being out of Bangalore I missed out many TV programmes related to elections. The only silver lining was that I came back to Bangalore on the election day itself(midnight of previous day). The first thing in the morning I did in the morning was going to polling booth and vote ! What a coincidence ? it seems I came to Bangalore to vote.

Kalyan varma's photography workshop: I had confirmed my participation for the June workshop as slots in May workshop were already full. On Friday 2nd May Kalyan mailed me that a slot has come up in the May workshop. I replied to him explaining the situation and kept the slot on hold till Tuesday afternoon Paris time. When I was about the mail him that I won't be able to make this time. Then all of a sudden an official mail came that I have to return back to Bangalore. As I already said that I came back on Friday midnight and next day got up early in morning(without having proper sleep). After voting I straightaway headed to the workshop venue at 10 am. It was nice intensive and interactive 2-day workshop without a dull moment. I hardly dozed in the workshop due to lack of sleep.
at Saturday, May 10, 2008