Posted by Sandeep Shande Posted on Sunday, June 15, 2008 with 6 comments


Instead of presenting the report about the trip in a usual chronological narration, this time I am presenting it in a different way. Imagine that one of my friends say 'SP' asks me "how was the weekend" on Monday morning and I respond by narrating about the trip through Q&A.

SP: Hi Shande ... how was the weekend.?
Me: It was nice. On saturday(June 14th) I had been to Maidenahalli Reserve Forest with my friends Rohit and Jatin. The other two people on board were Rohit’s friends Ravindra and Sourav.

SP: Reserve forest ? where is it ? what's the big deal about the place.
Me: The reserve forest is near Madhugiri in Tumkur district and it has highest number of Blackbucks in Karnataka. 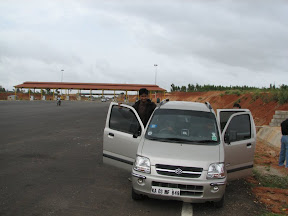 SP: What was the main acitivity ?
Me: To shoot black bucks ..

SP: What ? are u crazy ?
Me: Relax ... I mean to take photographs of Blackbucks ... not the Salman Khan type harakiri as you're thinking.

SP: How you got to the place ?
Me: Since there were no proper KSRTC bus to the place, we planned to travel on our bikes. Then getting to know about the distance - 165 km we dropped the plan of going by bikes. Finally, we traveled by Sourav's Wagon-R.

SP: 165 km ? isn't it too much for a place in Tumkur district. Can you tell me about the route in detail.
Me: The distance includes the round-about route(Kanakpura Road->Mysore Road->Tumkur Road by NICE road) we took from Rohit's house to Nelmangala. This was to avoid traffic congestion in Tumkur Road. From Nelmangala we followed the route mentioned in the reference blog.

SP: Was the reference blog helpful ? Were you able to reach the destination without any hassles.
Me: Not exactly. We followed the blog documentation till Madhugiri. There was some confusion after Madhugiri as the sign boards mentioned the reference blog were missing. Then with the help of local villagers we managed to reach the destination. Especially the last right turn between Puravara and I.D. halli, we had to ask 2-3 different people to find the exact right turn.

SP: Btw how was NICE Road?
Me: It was awesome; we covered the Kanakpura Road to Tumkur Road within 20 minutes. While coming back also we took the NICE road till Mysore Road. After experiencing travel in NICE road, NH-4 highway looked like an ordinary road.

SP: What was total duration of the trip?
Me: We left Rohith’s home around 7 am and came back to the city by 10 pm. One-way travel time was four and half hours including pit stops for food.

SP: What about food ? Are there any hotels nearby?
Me: No ... While going we had breakfast on the way at Kamat Upachar in NH-4. As per advice of the reference blog we took the lunch (Rice Bhat) as parcel. While coming back we had evening snacks had at A1-Plaza. The hotel with reasonably priced food is functional in spite of closure Reliance pertrol bunk recently(because of oil price hike). 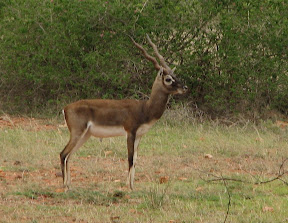 SP: Coming to the main point .. were you really able to find Blackbucks ?
Me: Yeah … Initially before entering the reserve forest itself we found a Blackbuck at a distance of 20-25 meters and captured it in our cams. This phenomenon repeater 2-3 times. May be the animal was not able to recognize us, as were sitting in the car. As soon as we got down from the car the scenario changed and they started running away from us. Later in the evening we found one watch tower in the reserve forest, sat silently in it and played the waiting game. After few minutes Blackbucks appeared in a group. But this time, it was sufficiently far from us and we were not able to capture in our cam. Using binoculars we managed get good glimpse of them. Rohit had other thoughts, he chased them cautiously to take a snap of them. Have to check with him how the snap has actually come out.

SP: Are there any other animals in the same place?
Me: Nothing else in particular. To photograph you will find a few birds. Other than that there are usual stuffs such butterflies, bugs and chameleons.

SP: Were there any hilarious moments?
Me: There were many. The major one was optical illusion of a Blackbuck. While entering the Reserve Forest we thought a cactus plant to be a Blackbuck. It was really looking like a Blackbuck from distance.

SP: Would you recommend Maidenahalli as a Weekend Getaway ?
Me: yeah .. why not .. seeing and capturing wildlife is anyday a thrilling experience. I would recommend that one should stay overnight by taking permission from the Forest department, according to local villagers majority of the Blackbucks can be spotted after 7 pm.

SP: Thanks Shande for sharing the experience and the details.
Me: U are welcome! I shared some photgraphs in flickr and picasa. please go through them. 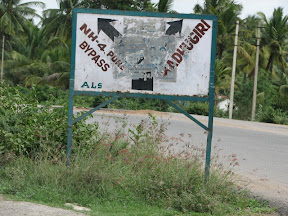 Sign board for right turn towards Madhugiri in NH-4. 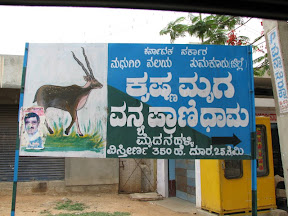 Forest department signboard at Madhugiri.
from there Maidenahalli is 25 km. 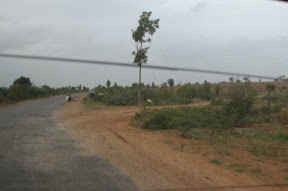 Right turn to Maidenalli: in between Puravara and I.D. Halli.
Remember there is no sign board. It is very easy to miss this right turn.