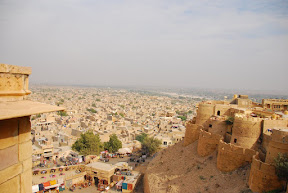 After the exploration of Pink City Jaipur the next place on our Rajasthan trip itinerary was the golden city Jaisalmer. There was a slight struggle while collecting grassroot level information about the place. Many of my batchmates in PGPM who were native of Rajasthan had a little idea about the city as it’s quite remote from other parts of Rajasthan and also it’s unfeasible travel there for major part of a year. The only proper source was Arun’s India travel blog and the reference of Badal Singh(Khuri).

Getting there:
To get there from Jaipur we opted for a sleeper bus operated by Hanuman travels. Since the journey was around 12 hours, for comfortable travel I had booked single berths(for myself and Ande) two days in advance. After boarding the bus, we realized our seats have been given away to some high priority customers (read foreigners) and we were forced to compromise with a double berth. After a slight argument we decided to settle down as there was no point in continuing with it. Seeing two guys together in a berth a firang girl sitting on a single berth on opposite side gave us a weird look for obvious reasons. Being clueless to return the favor just we just made an attempt to guess her nationality. Using our limited knowledge we came to a conclusion that she might be an Israeli. 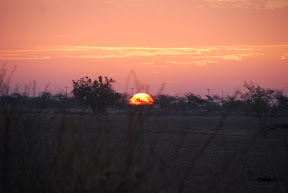 The journey in the semi-rickety bus was quite comfortable thanks to good condition of roads in Rajasthan. Before reaching Jaisalmer our Bus had two unscheduled stops. First time it was around midnight because of flat tyre replacement and then again at dusk time our generous driver halted to help another driver whose bus had gone into pits. Just before the second pit stop we passed by a town called Pokhran (rings a bell ?) yes it's the site for India’s Nuclear test. While our driver was busy in helping we utilized the opportunity to witness beautiful sunrise amidst semi-barren landscape.


Arrival in Jaisalmer (13-Dec-2009)
When the bus was about reach the city a guy emerged from a group local people who were seated in the lower level of the bus and asked us "where-from and where-to" queries. etc. By his tonality he looked like a pakka rip-off guy. When the bus reached Jaisalmer at 8 am, the rip-off guy forcibly took us in a jeep to his hotel. The firang girl was also forced to do the same. In between we got to know that she was from Netherlands and our theories on nationality recognition which were formulated previous night straightaway went into a gutter :) 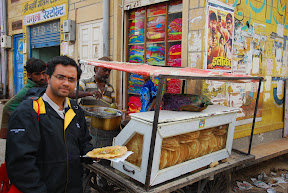 The rip-off guy fired all his cylinders to reduce trust deficit and asked about our plans in-and-aroud Jaisalmer. The moment he got to know that we are going to Badal Singh’s house in Khuri, he started marketing for some resort in Sam showing us a jazzy brochure with picture of Swiss tents and gave us a quote for one-night stay. Ignoring all his words we just finished basic morning ablutions at the hotel, paid customary 50 bucks and headed towards bus stop for catching a bus to Khuri. Before boarding Naveen bought floaters at a lone footwear shop as he was totally frustrated with formal shoes. For breakfast we had delicious Pakwaan at a tela near busstop. It was essentially a big papad, with some masala toppings and tasted similar to Masala Puri which is prominently available at chat shops in Bangalore.


Khuri Chapter
We took 10:30 am bus from Jaisalmer and reached Khuri in afternoon. The stay at lonely planet recommended Badal House was the major highlight. We were absolutely amazed by his humbleness and it was very surprising to see entry of several foreigners in his guest book. Apart from the overnight stay at Khuri, in evening we did camel safari and experienced sunset amidst Khuri Sand Dunes. [Read more in a seperate post Khuri and Badal Guest House]. Next day morning we took a bus back to Jaisalmer and at the Jaisalmer bus stop we again had tasty Pakwaan as breakfast at the same tela where we had on previous day 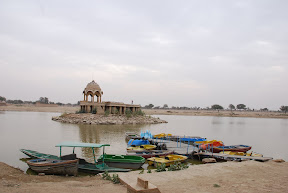 The Jaisalmer chapter continued with check-in at Payal Hotel, which is an affiliate of YHAI. After freshening up we started local sightseeing. First we went to Gadi sagar lake which was close to our hotel and from there we took an auto Jaisalmer fort. The fort was architecturally different from various forts we had seen in Jaipur. Best part was the terrace view where one can witness homogeneous golden color of the city on all four sides. There was a small mueseum inside the fort in which there was an unique statue of Lord Rama with a beard. 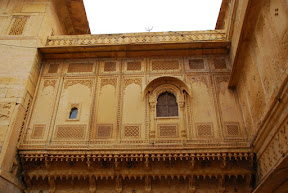 After seeing the fort we hired a bike just outside the entrance and did a wonderful ride(40 km one way) to Sam Sand Dunes. Traveling on our own in a desert landscape and witnessing zero vegetation on both sides of the road was a different experience altogether. While getting to and moving around Sam Sand Dunes we were hopelessly irritated by several camel riders. It was very obvious that they were desperate for opening their account for the day and had overestimated the demand when the core Christmas vacation was still two weeks away. 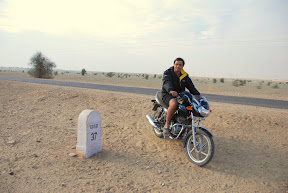 While having snacks at a shop next to the RTDC hotel in Sam, the owner of the acknowledged that it’s good that we came to the place two weeks before Christmas vacations. Usually at that time the place will be so crowded that it will  be hard to find even a parking space !

We decided to walk in Sam Dunes entirely on our foot, since we were somewhat uncomfortable with camel ride on previous day at Khuri. Getting atop 25-30 feet high dunes and creating mini avalanches was a funny experience. Unlike Khuri we could not witness proper sunset at Sam as horizon was totally covered with clouds. 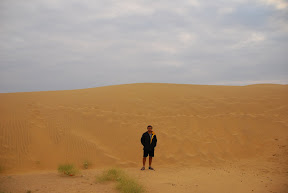 When it was about to get dark we started our return ride to Jaisalmer. After handing back the bike we had dinner at a decent food near the fort. And we concluded the Jaisalmer trip by taking overnight train to Jodhpur. The train had only two reserved coaches one Sleeper and one 3AC and the rest were general compartment. Since the two bogies were completely booked we had no other option to travel in a general compartment which completely empty.


About Tanuat Rai:
In compartment we met a few camel riders who were going to Jaisalmer for some personal work. They asked us whether we had visited Tanaut Rai a place 120 kms from Jaisalmer at Indian Pakistan border and where there’s a famous Devi temple. The temple was unaffected during Indo-Pak wars and one can find several unexploded shells around it. For a moment we thought of getting off the train in order to extend our Jaisalmer trip to see Tanaut Rai. But some things we need keep in to-visit list so that we will be motivated to visit the golden city for second time !
at Friday, November 26, 2010