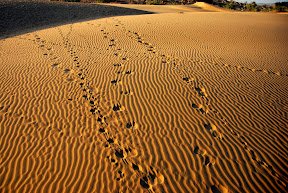 "There’s nothing much to see in Khuri, one can just have a camel ride and witness sunset being in sand dunes. Adventurous people can do an overnight stay in sand dunes." - a humble reply from the owner of lonely plant recommended guest house - Badal Singh while answering to my query about places-to-see in Khuri. I was literally taken aback by his down-to-earth nature and the courteous caller tune Ghar Me Padharo Gajanadji was an addition to it.


Getting to Khuri
After an overnight journey from Jaipur to Jaisalmer, we took the 10.30 am from Jaisalmer bus stand from Khuri. On board the bus, after noticing us as tourists one man started aggressively marketing for his guest house in Khuri, when we informed him that we are going there to stay at Badal Singh’s house. The ride in the local bus was memorable as it was in extremely rickety state. There were no carriers for bags inside the bus and we ended up keeping luggages or our lap itself. Majority of co-passengers were localites. There was an old man, with typical semi circular moustache and wearing pagadi and big glasses. It was amusing to see him operating a mobile and dialing a number by looking at a pocket diary. Mobile telephony has definitely created a holistic revolution in India ! 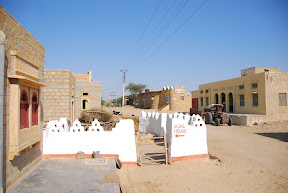 On the way to Khuri we witnessed the desert landscape in broad daylight. For some stretch there were plenty of windmills on either side of the road adding to the visual treat. Around 12.30 pm we arrived at bus stop of Khuri where Badal Singh was personally present to receive us. The walk in Khuri village upto Badal house also memorable as it was totally free from commercialism of Jaisalmer. On the way to Badal's House we came across many other guest houses. One of guest house had a board written in Korean ! My oral exclamation was followed by Badal Singh’s comments that many phirangs stay in Khuri for months. 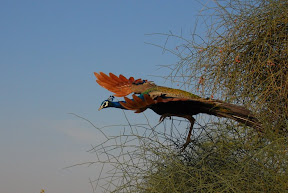 Badal’s house was a simple house with many rooms and huts. He showed his guest book where we found entry of every damn nationality. Our very first activity was lunch and we had yummy homemade bajre-ki-roti. Then after having a small nap at 4 pm we started with camel safari. Acchiya and Kesar were the two camels and our guide was Badal Singh’s son Narpat. We passed thru a few small villages to reach sand dunes of Khuri. On the way we came across wildlife such as chinkaras, peacocks etc. A peacock taking off from a tree besides our path gave me an opportunity to click snap of the trip. 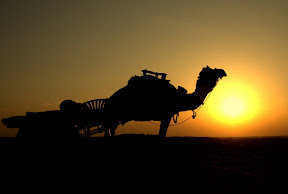 The sand dunes was already brimming with tourists to witness the sunset. While capturing photographs for passing the time we roamed on the sand dunes on our feet. We happened to meet a swiss couple who had come down to dunes by riding a camel cart. They were initially surprised when we nodded that we know about their country and were even more surprised when they came to know I had visited Jungfrau recently. I briefly narrated about my endeavors in Europe and students' exchange program.

After witnessing the beautiful sunset we headed back by sitting on Acchiya and Kesar to home – I mean Badal’s house :) Then we had brief chit-chat with Badal Singh on various topics which was followed by delicious Bajre-ka-Dhokla with curd as dinner. Before going to bed we spent some time atop terrace of the house by gazing at the stars.

Next day morning we got up early to start our return journey from Khuri. It was a very sad moment to leave Khuri so prematurely but we had to continue with our plans due to time constraints. We took the 8.30 am the bus and were back in Jaisalmer at 10 am.
at Saturday, November 27, 2010