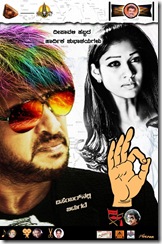 Super is the latest movie of Upendra (a.k.a Uppi and Real-Star), one of distinct actor-cum-director in Kannada film industry(Sandalwood). The movie is his directorial venture after a gap of 10 years ! The last movie directed by him was “Upendra” in 1999. I had cherished the non-linear screenplay and dialogues of that movie for a long time. In fact, I was so inspired by the character “Naanu” in those times that while learning programming the very first of filename of my ‘C’ program was ‘NAANU.C’ ! and also it’s the major factor for domain name of this blog :)

The central theme of Super is fresh i.e. how a revolutionary by name ‘Subash Chandra Gandhi’ turns around economy of India with an innovative approach.  I don’t want to discuss much about the storyline and straightaway get into Likes and Dislikes.


What I didn’t understand

To conclude, it’s a paisa vasool movie for people who usually view movies without any prejudice.
[Image source: songmagic.yolasite.com]
at Sunday, December 05, 2010