From childhood days, I have been hearing about Bengaluru Karaga festival as one of the famous local festival of the city. My mother used to describe that in the festival a few enthusiastic people carry a heavy pots on their head and run around the Pete area of Bangalore. For years my knowledge about the festival remained constant and occasionally I used come across a few photos in newspapers about the festival which is celebrated in usually in summer time. Frankly speaking, I didn't even bother to have a glance at wikipedia page of the festival.


Recently, when I came across a coffee table book Bengaluru/Bangalore: In First Person Singular by a renowned photographer Mahesh Bhat, I came to know about more interesting aspects of the festival. Next, I got all handy information from Mahesh and decided to venture out on the day of the festival with fellow enthusiasts from Bangalore Photowalk. 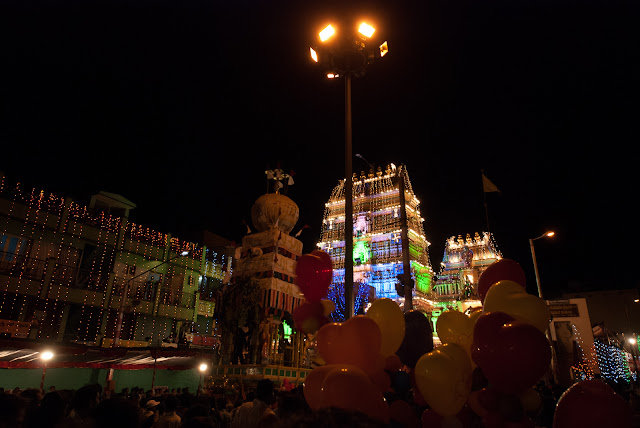 The festival is celebrated on first full moon day of a lunar new year (Chaitra Poornima). The focal point of the event is 800 year old Dharmaraya Swamy temple in Thigalapete which is stone throw distance from SP Road. As per plan we extended our photowalk on MG Road on Good Friday to be at the right place well before the start of the festivities. In contrast to our regular photowalks, this one started as late as 9.30 pm  !


The venue was brimming with thousands of people especially from Thigala community and some of them had come from far away  places to be part of the festival. A huge gathering means business to some people. The roads side eat-outs which usually shut their shop at dusk time, started opening at 9 pm onwards to cash on with the overnight celebrations. Our initial plan was to shoot upto midnight. But witnessing the enthusiasm of the people we decided to stay on till the time we get exhausted ! 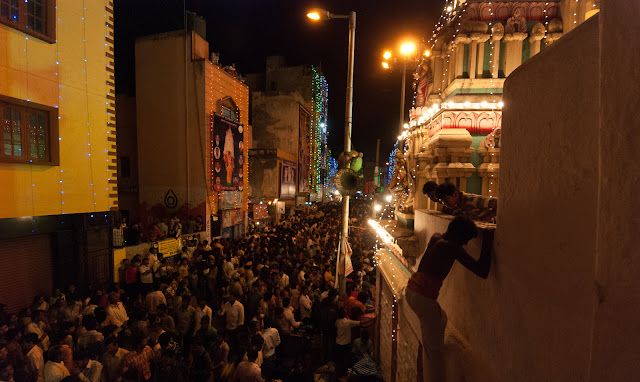 We discovered a vantage point, a stair case next to the temple where we could get a decent view of activities inside  as well as outside the temple. Like us most people in the crowd were busy hunting for their vantage points in order to get a proper glimpse of the Karaga. And there were typical masalas of an Indian festival like minor stampede, lathi charge by police constables etc. 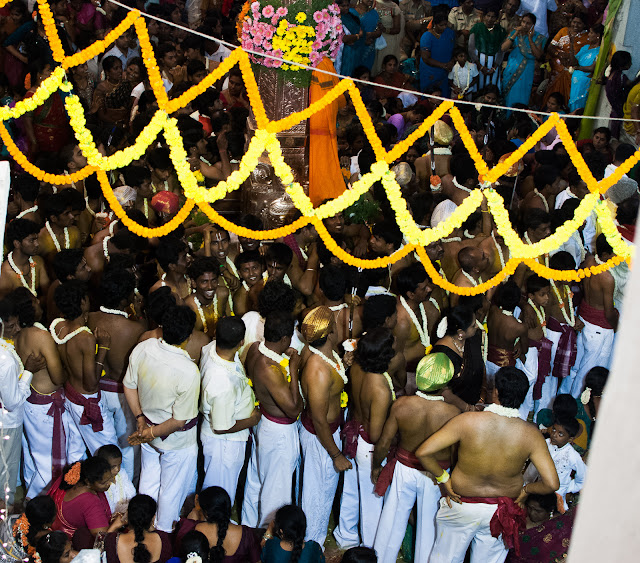 It was a long wait indeed for the Karaga by standing on our one and half feet and rubbing shoulders with people around us. From our vantage point we did some timepass by playing dum charades with a few young people inside the temple. 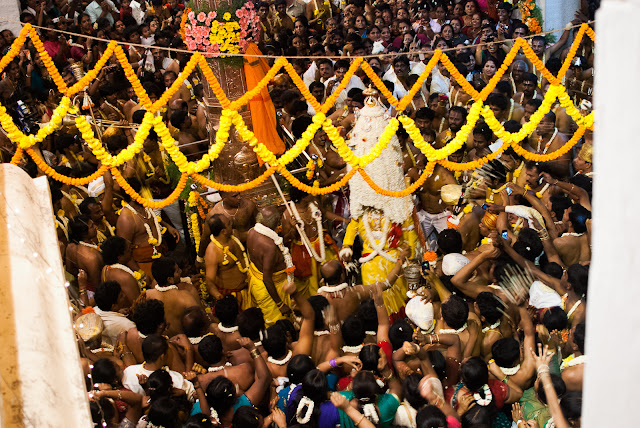 A few minutes past 1 o'clock the ultimate thing happened. The head priest of the temple manifesting himself as draupadi, with a pot dressed with jasmine on his head came out of the Garbhagruha. Wikipedia aptly describes this moment in following words:


Thousands and thousands of eyes awaiting the karagashakthi to come out from the Garbhagruha. The enlightened Karaga Shakthi comes out like a thunder light from Garbhagruha.

After doing 3 rounds around the Garbagruha, the Karagashakti came out of the temple being showered with jasmine buds and not-to-mention applause, whistles from the crowd. It moved around the chariots which had come from various temples in pete area and later started it's long overnight journey in the Pete area. 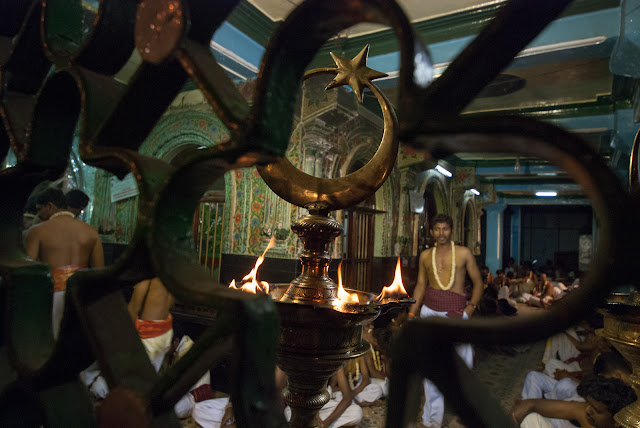 It took a while for us to digest the breathtaking experience. We relaxed on terrace of temple for a while by having a few sips of water,  eatables and also discussing briefly about spirituality. Then, we headed towards the famous Hazrat Tawakal Mastan Shah Dargah. A hindu deity entering a muslim shrine is very interesting story indeed. Long back time, the Sufi saint suffered some injuries during Karaga procession. Seeing the unfortunate incident, the Hindu priest stopped to apply turmeric to the Muslim saint’s wounds. Touched with this, the Sufi master asked that the Karaga stop at his tomb after his death. And so the tradition began in those days is followed even today ! 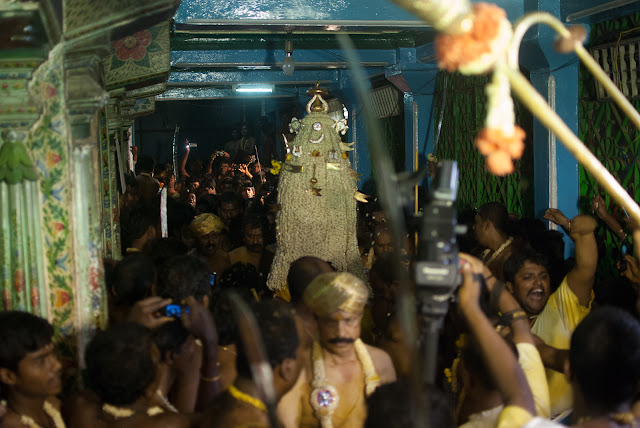 Around 4.30 am, the Karagashakti entered into the Dargah and the unique moment was cheered a with huge applause by people who had gathered at the venue. The volunteers of the dargah supported us to take close shot of the Karga but atmosphere was so energetic that we could not do much justice with our cameras.


We had plans of visiting Ananmma and Yehalanka gate temple to have one more glimpse of the Karagashakthi. Since we could reach these temples on time, instead we decided have our last glimpse at Avenue road junction where people had opened the doors of their shops partially to get it blessed from Karagashakthi. 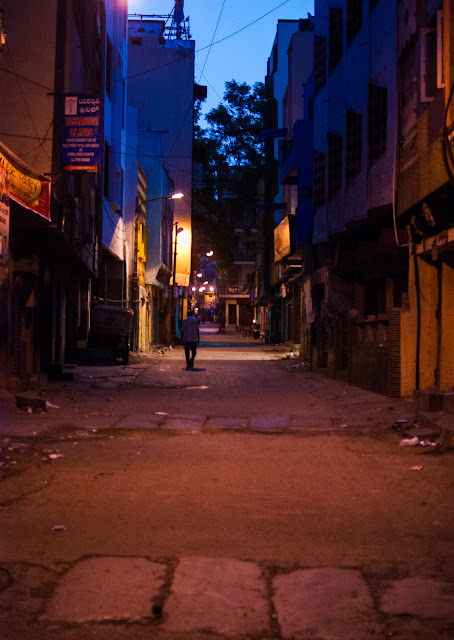 As the daylight started to fade in, it was time to conclude one of amazing photowalks which started at dusk time and ended at dawn time. While getting back home we had a stopover for breakfast at Brahmins' Coffee Bar which turned out be icing on the cake. It was truly an awesome, electrifying and energetic experience which we managed without dinner and sleep :). Special thanks fellow photo enthusiasts from Bangalore Photowalk: Vinod Krishna, Shivani Venkatesha, Vikram Ramesh, Shilpa Kala, Praveen, Sasi Kumar. And not to mention Mahesh Bhat who was not with us physically, but if I had not read his book this experience would not have materialized.

Here's a nice description by Mahesh Bhat about the festival:

The festival is older than Bangalore in many ways and brilliantly captures the spirit of the people who call this city home. Imagine — a Hindu festival with a Telugu lineage, being celebrated by Tamils in a Kannadiga locality where the idols are placed in a dargah as a part of a great custom, proving that communities and religions can co-exist, live in peace and love one another. I think that if there’s a definitive picture in the collection, it’s definitely this one.