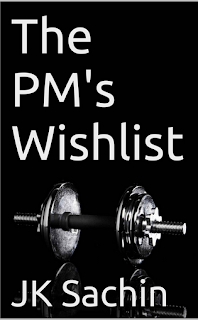 This is blog post is about my review on the book PM Wishlist’s written by JK Sachin. To put it in a nutshell the story narrated in the book is a political drama in which protagonist is a person by name Sharan Karan becomes Prime Minister of India overcoming many hurdles. In the narrative the book brings out several solid ideas for solving perennial problems faced by our nation. The idea I liked the most was “IT(Income Tax) points which is one of the ways of motivating people to pay taxes proactively and in turn get more benefits from the government.

The book also throws light on Sharan’s core focus areas MASTEESHK - Manufacturing, Agriculture, Services, Technology, Electricity, Education, Sports, Healthcare and Knowledge and how each sector will be revamped inturn fueling growth of our nation. I don’t want to get into details as it may become a spoiler for people who will be reading this book in future.

Any political story is not complete with an assassination attempt. The nail biting assassination sequence in second part of the book brings an interesting element to the overall story. But the things becomes predictable in patches may be co-incidental reference to the story of current Prime Minister of India [ I started reading this book before May 16th 2014 and the predictable patch became boring to read post May 16th results :) ]. Having said that, it’s a refreshing read if you compare with the stuffs in mainstream media where politics has been stereotyped into beauty contest and street flights !
at Saturday, June 28, 2014