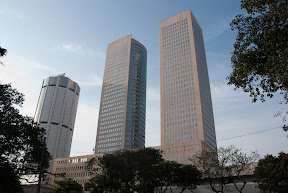 It was an India v/s England encounter in Cricket World Cup 2011. The see-saw battle was in the last over and equations were '11 runs required from 4 balls'. India's Munaf Patel was bowling English tailender A Shahzad. On delivery of a good length ball, the batsman just got his front leg out of the way, got the half-volley he wanted and creamed it straight down the ground, over the bowler's head and into the stands for SIX! 11 players in light blue jersey were shocked, Indian spectators in stands were stunned, English players in dressing room were on their feet and majority people gathered at an open air pub at Lewis Place, Negembo were celebrating. Yes you read it right, I witnessed the decisive moments of the pulsating contest when I was on a weekend trip to Sri Lanka. Personally to me, it was very surprising to note that local people were biased towards their colonial rulers in contrast to a norm in India, where we prefer supporting teams from the sub-continent when they are playing against the teams from English background.

We witnessed the match when our two day experimental trip was about to conclude. After our brief endeavor on Day-1 at Hill County i.e at Kandy, Nuwara Eliya we started downhill journey towards Negembo. While returning we by-passed Kandy and for evening tea we had a stopover at some hotel where we had to compromise with a sugary tea and some snacks fried in coconut oil. We arrived Negembo, when it was sufficiently dark and checked-in at Silver Sand Hotel. Myself and Ande had pre-decided to roam next to the sea after basic fresh up. Loaded with ethusiasm, while entering the hotel itself we asked the receptionist about distance of the beach from the hotel. He just showed the hand towards the backyard of the hotel and said "it's right here !".

The night life at Lewis Place was not that great and not that bad either. The place was brimming mostly with old European couples and we could hardly spot any person from younger generation. After a brief walk, we managed to spot a young firang female, may be a Russian, who approached us aggressively with a card of some night club. We also noticed in the background there was a Sri Lankan chap monitoring her actions. Realizing actual intentions of the female, we just decided to ignore her.

We explored the place further, peeped at a few pubs and did some basic shopping. Ande who usually travels with minimal luggage, decided to dedicate the free time for buying some essential stuff. The long casual walk was concluded with a sumptuous Sri Lankan dinner at our hotel. 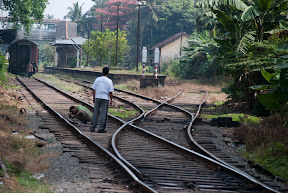 Day-2 of the trip we had to explore Negembo and Colombo. We got up early had a casual walk on the beach at backyard of our hotel. The place was too deserted and we could find a few firangs here and there jogging and gasping fresh hair. After morning ablutions we left towards Negembo station to catch a train to Colombo. In between, we spent some time next to lagoon where there was a dutch fort which which was converted into a prison. We thought of doing some timepass at Negembo fish market which was next to the fort, unfortunately it was closed on account of Sunday being a holiday.

At Negembo station we had to wait for some time as our train to arrive and it was bit late than the actual schedule. Tickets were issued only 15 minutes before the arrival. The short journey to Colombo was hopelessly boring, the train stopped at all stations, changed tracks and reached at Colombo Fort station at 12 o' clock. It's absolutely recommended to give this option a skip while commuting between Colombo and Negembo. 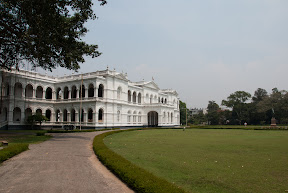 Our first destination in Colombo was Natural History Museum which can reached easily by a city bus from the Fort station. The major attractions of the museum were golden crown and thrown of Kandy. There were many exhibits depicting rich history of the nation. We spent quality time at the museum and had food at the cafeteria within premises of the mueseum.

After completing the museum visit, Jamaldeen(FB friend of Praveen) joined us and we were off to city exploration with  him. Firstly, we roamed around in Fort area which had a strong resemblance to South Mumbai with lot of bank offices. And not to mention there was a big office of State Bank of India which gave us homely feeling. 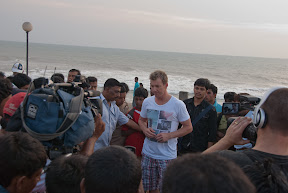 There were lot of security forces around the Galle Face and they were randomly doing ID check of tourists. At Galle Face beach we spotted one big huddle of people. Something was happening inside, some television interview was ongoing and we discovered that interviewee was none other than Australia pacer Brett Lee. After conclusion of the session, some people from our group took a photo standing besides him.

Continuing our walk on the beach, we witnessed sunset at and decided to return after spells of photo session. We came back to Colombo Fort station for dinner and took a bus back to Negembo. It was a nice Air-Conditioned bus which took us back to Negembo in an hour and definitely a better option than train ! 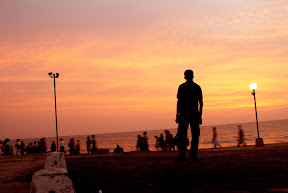 After coming back to our hotel at Negembo, we quickly rushed to screening of India England match at an open air pub and witnessed final moments of the tied match.

After the match we packed our luggage and took a cab to Bandaranaike airport. We were first to check-in at the counter and had to wait for a while for seat allotment as we had opted for the emergency exit row and generally such seats are released 3 hours before the scheduled depature.

We were back in Chennai earlier than scheduled time and did a bid adieu to Srinidhi and co. While waiting for our flight to Bangalore we experienced pathetic toilets of Chennai airport and the AAI airport feeling was reloaded again. However,  the stinking feeling was annulled by smooth 40 minutes Indigo flight to BLR and thus concluding our experimental weekend trip to Emerald Isle.


[ Please note: A few phrases in the first para are excerpts from cricinfo commentary page]