Today is second anniversary of this blog. It's been exactly two years since the time I started blogging. As mentioned in the first anniversary post I had to come across many mental hurdles. But after series of positive triggers the thoughts sharing started and the rest is history. 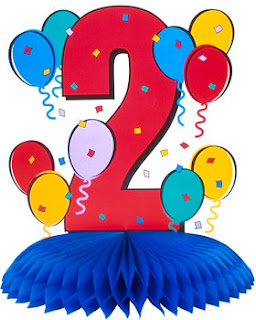 Major milestones/highlights in last one year.
- Moved blog to custom domain: when blogspot domain got blocked in my office, it motivated(forced) me go for a custom domain. The movement took almost 2 months because many technical issues with the vendour.
- Crossed 10K visitor mark: Seriously I never really imagined that the visitor count will reach 5 figure mark one day. Now the blog is almost at the threshold of crossing 20K mark.
- 100th post: Scored a century w.r.t number of posts.

Blogging Peers:
Raveesh has been my best blogger buddy. We two started blogging almost at the same time and have been mutually commenting and complementing each other's posts in the blog. As a result we two have grown a lot as bloggers.
There are many other blogging friends (find their names in the side panel), but majority of them of either gone into long hibernation or may not be in a position to share.

Blogging break:
The break won't be intentional but sometimes it becomes inevitable. It happened during my Paris biz trip and a few weeks before that. Due to lack of time thoughts remained thoughts and didn't get converted into blog posts. I still want to share them but before that I have to resolve to-post-or-not-to-post issue.

Blogging at others places:
I continued my occasional blogging at Bangalore Metblogs. It has been the right place for me to share the thoughts which I want to be shared at a bigger platform. Being a metblogger I got a chance to visit the brand new Bengaluru International Airport, months before the actual inauguration.
The other place (blogging venture) was unofficial-IPL-blog with Aditya, Raveesh and Paras. It was a perfect place for me to share thoughts about cricket's biggest carvinal.

Comments and Novelty factor:
In first year I got many comments, but in the second year eventhough the traffic increased many folds the number of comments decreased. Is it because of novelty factor that I got more comments in 1st year or my posts have become monotonous or people have become too busy to comment or people don't want to put that the same mundane comments ?

In last one year, totally I have posted 71 posts. Of which my favorites have been.
- Andaman trip series
- Paris trip series
- Visa extension saga
- Jenukallu Gudda Hike.